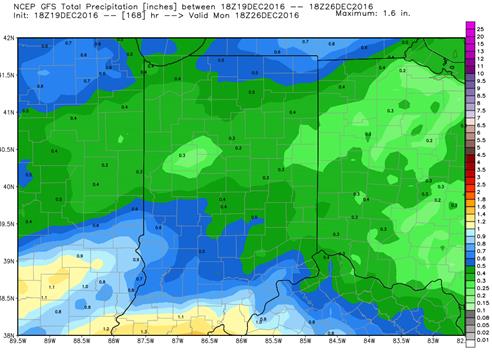 Winds turn to the southwest today and that should start to help temps moderate just a bit. Through the rest of the week we look for temps to climb back to near normal levels, and we should see sunshine dominate through the period. We still see potential for a weak upper level system to pass by to the north over MI and the great lakes for Thursday, but also do not see anything more than clouds down this far south. Even then, the clouds will only have potential to impact northern Indiana.

Our next system is still on the way for the weekend. WE now see this coming in 3 waves. One overnight Friday night through Saturday late afternoon, one Sunday (Christmas) morning through evening, and one Monday, the 26th all day long. Each wave can have .25”-.5” rain potential. And yes, we did say rain. Temps now look warm enough to see mostly liquid precipitation. Plus, we do not see much precipitation in overnight periods where temps could fall off more. So, outside of maybe some sloppy wet snow flakes to start it all off before sunrise Sunday morning, we think this is mostly a liquid event. There is some concern that cold air races in faster on Monday and that gives a potential for rain to end as snow, but for now, we think the moisture is just moving out too fast, and we are not going to talk up a big snow event. Right now, we are putting combined precipitation totals over the 3 day period at .4”-1.0” with a few areas going up to 1.25” – all rain.  Coverage will be nearly 100%. There is plenty of time for the system to modify, but for now, we think we are dodging a bullet for this holiday weekend. IT may not be the brightest and nicest period, but it shouldn’t turn into a major travel impeding snow storm. That will be farther west, as we look for SD, southern MN, southern ND and even a few parts of IA to get hammered with heavy snow potential. Just FYI. The map above shows one model’s solution for total precipitation for the weekend system through 1 pm Monday, the 26th. We think actual rain totals will be skewed slightly higher than this when all is said and done.

Behind that system, much colder air does push back in, but it will not be as cold as what we just worked through. Temps will be below normal for next Tuesday Wednesday and Thursday. Temps moderate a bit toward the end of the week. We will watch for another weak front for the end of the week and next weekend, but it looks to have inferior moisture working with it at this point. However, once we flip into 2017, we see a significant system coming together in the Four corners region, and it would be poised to move into our region around the 6th or 7th. That will be the next big system we watch for after this coming weekend. Overall, the pattern still remains active, but we are stretching systems out just a bit, allowing bigger “rests” in between these frontal passages.