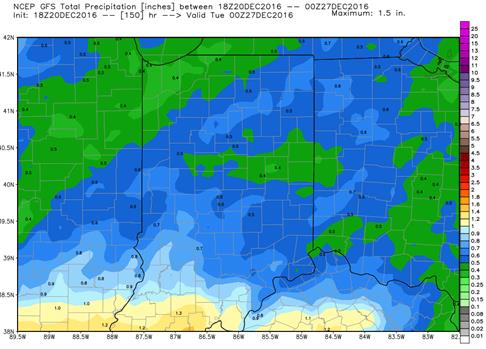 Temps continue to moderate some today, working to normal levels over most of the state. This will continue through tomorrow and Friday as well. South and southwest winds will keep the region dry through the period as well.

Our next period of unsettled weather develops Friday overnight into Saturday and kicks off a three-day period that will end up rather wet over most of the state. Showers begin to push into the state near midnight Friday night and will spread northeast through the overnight hours. This first wave should be moving out of the state by Saturday midday. Moisture totals there should be mostly a quarter to third of an inch or less. The action will be mostly rain, although we can’t rule out some sloppy wet snow over NW parts of the state, especially in areas where there is not very much moisture to work with. Coverage of this event will be around 80%.

The rest of Christmas Eve will be dry, but clouds thicken again overnight Saturday night. This will lead to a second wave of action that moves in for Christmas afternoon. This batch of moisture looks to impact the northern half to third of the state more than the south. Rain totals can be from .3” to .8” with coverage at 80% over the northern half, but 20% or less south of I-70. Precipitation will be in the form of Rain, and will be most intense after 3pm.

We get our third and final wave later Monday afternoon and Monday night with the cold front finally working through the state. This will be the wave that brings the biggest precipitation totals, with half to 1.25”. Coverage will be nearly 100% of the state. Precipitation type will be rain and thunderstorms, although we still have some minor concern about the speed of cold air coming in behind the front. Right now we look for moisture to be gone before we see temps dip below freezing…but that will be the biggest thing we need to watch at this time. If everything works as we see it, all precipitation over this holiday weekend period will be liquid. But…totals look a little more impressive to us this morning, enough to raise our combined 3 day totals to half to 1.5” with coverage at 100% of the state. The map above shows potential combined rain totals through Monday night. We think the northern part of the state can see higher amounts thanks to the second wave on Sunday. With the current snowpack over the northern third of the state, the warming expected this weekend and the rains, we could enter next Tuesday with a very wet situation statewide, and we would not rule out some minor flooding in spots. Ground conditions are not frozen very deep, so in theory, we should be able to handle this water fairly easily, but time will tell.

Behind the Monday front, we see much colder air returning, although we will not come anywhere near the level of cold that we just got through the past few days. Temps will be below normal, but stay mostly in the teens and 20s, with overnight lows in the single digits at worst. Dry weather expected for next Tuesday and Wednesday.

Models have a dramatically differing opinion of next Thursday. The European model has at best a weak trough sweeping through quickly on Thursday that can produce a few hundredths of an inch to a tenth or two of scattered showers, mostly over the central part of the state. This would be with a stronger low passing by south of the OH river. Coverage would be no better than 40%. However, the GFS model ramps up a big rain making front for the 29th, that could bring half to 1-inch rain totals to 100% of the state. WE think, given the current pattern that is emerging, the GFS may be slightly better at this point. WE like the solution because it also leads to a much colder pull of air down out of Canada for the turn of the year, and sets up a similar pattern to what has been evolving over December to this point. Still, there is some uncertainty at this point, and the time period will need to be watched closely.

Behind that event, dry, cooler weather should set up for the 30th and 31st, with temps normal to below. No major precipitation is expected at this point for New Year’s. However, an Alberta clipper type system may try to rip into the region around the 4th, bringing a chance for a quick burst of snow through the 5th.