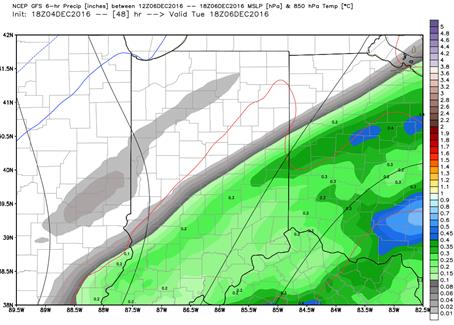 A little bit of a lull in the action today, after rain and snow blasted the state yesterday. Snows over the northern half third of the state were very wet and heavy at times, with accumulations of an inch, and more closer to the lakes in NW Indiana. Still, this was just the first wave, basically a warm front, with the cold front and wave number two on the way for tomorrow. However, we have seen a slight adjustment to the track of this second wave of action. The low is going to track a little farther to the east, which will keep the heavier rains over southern Indiana, and may allow for parts of northern Indiana to escape with little to no moisture. Right now, we look for rains of .25”-.75” from I-70 southward, with coverage at 100%. North of I-70, however, rain totals will be a few hundredths to no more than a quarter of an inch, with coverage likely down around 50%. In fact, parts of NW Indiana may end up with no precipitation out of wave number two tomorrow. After the snows, we don’t think anybody in that part of the region will likely complain too much. The map above is a snapshot of potential precipitation coverage at 1PM tomorrow.

Dry for Wednesday, but then we see another quick moving clipper like system for overnight Wednesday night and Thursday. Moisture does not look at impressive with this wave, but the cold air is definitely in play. As we wake up Thursday morning, the freezing line will be down into southern Indiana, flirting with US50. That means precipitation that moves in overnight Wednesday into early Thursday will likely be all snow. However, liquid equivalent totals look to be only a few hundredths to a tenth, maybe 2 tenths in a few places, meaning the snows will not be overly dramatic. Still, it is a signal that the much colder air is likely in to stay. In the wake of that system, we are dry for Friday, Saturday and Sunday. However, we will be very windy, with strong winds out of the NW drawing down some very cold air, and bringing wind chills into our vocabulary for the first time this season.

Our next front is on the way to start next week, for Monday into Tuesday. Cold air remains in play over the state, with areas from I-70 northward staying in an air mass that will be freezing or below, and temps from I-70 southward will be in the mid to upper 30s. That will be enough to keep all of Monday’s precipitation snow from I-70 northward, and then a rain/snow mix south of 70. Liquid equivalent in this system will be from .25”-.5”, so there would be some potential for some 2-6 inch snows to start next week over northern Indiana the way we see it right now. These are by no means “official” snow totals for this system…those will be posted later this week. Rather, this is just us “thinking out loud”…and prepping for an interesting start to next week.

Tuesday-Wednesday of next week should be dry, but cold. We expect the below normal temps to hold through the middle of the month, but at this point, we expect OK weather for the Indy farm show on the 14th. In the extended period, we war watching for another front around the 15th that can bring up to half an inch or liquid equivalent moisture, and then another front at we get closer to the 20th. Overall, the active and colder than normal patter than is emerging for this month will likely look to hold right on up to Christmas.