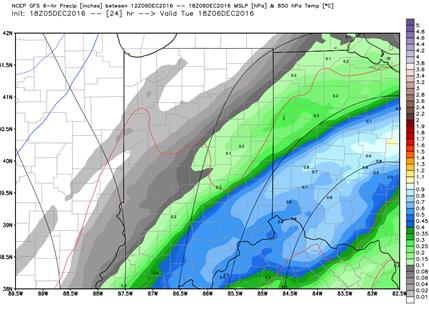 Rain sweeps through the state today, but the low pressure center that the wave is circulating around continues to move on a track that is just south and east of the state. That will confirm our thoughts from yesterday that the biggest rains will be over southern and eastern parts of the state. The best rains will be east of US 31 and south of US 24, all the way to the OH River. However, rains will be in over all of southern Indiana south of I-70. NW parts of the state will miss out, with no rains likely in Lake, Porter, LaPorte, ST Joe, Newton, counties, and a good chunk of the NW quadrant. Overall, we put rain totals at .25”-.75” with coverage no better than 70%. This map is a snapshot of potential moisture at 1 pm today.

Drying out by tomorrow night, and then continued dry for Wednesday. A change in the forecast keeps dry air in through Thursday. That little wave that was trying to bring in action for Thursday in the form of light snow, now as weakened to the point of producing only some clouds, and good west to NW flow that ushers in another push of cold air. So, at this point, outside of clouds, we see no significant precipitation through Thursday, Friday and Saturday

Clouds thicken up on Sunday ahead of our next front for early next week. This front will have both rain and snow with it, but we are hearing that some forecasts from national outlets are going over the top and forecasting significant snow totals (think double digits). However…we DO NOT SEE THIS at this time, and are looking much more conservative. We see liquid equivalent precipitation for the Monday time frame at .25”-.75”. Coverage will be 80%. It will start as rain, but will change to and finish as snow. There will be several inches of accumulation likely. However, it will not be 15” (as one forecast was trying to put it) and we will not be putting out official snow forecasts until late this week. But, it will be a significant event to start next week. Precipitations will be done by midnight next Monday night, and we should be dry for Tuesday and Wednesday.

Temps remain below normal through the entire upcoming 2 week period, and will be well below normal this weekend. That is one of the reasons for us having some caution about the upcoming system next Monday…this event will be developing in an already cold air mass, so it will not take as long to get snow going, and for it to begin to accumulate. Still, some these over the top forecasts are just plain irresponsible 6 days out.