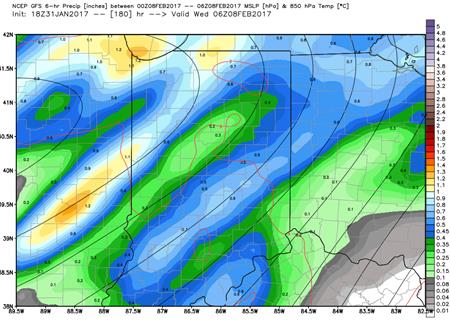 Colder, drier air works into the state today, sagging in from the north. While we should have better sunshine potential in the northern half to third of the state vs. yesterday, we still will have some clouds to contend with. This will not be the case farther south. However, full sunshine should dominate over the state tomorrow through Saturday.

No significant change in our next little wave that comes on for Saturday night through the first part of Sunday. WE have south winds that start to kick up Saturday afternoon, but it will not likely be enough to take temps above freezing. So, we still like some snow potential over a good chunk of the state Saturday night and Sunday. At this time, we are taking snows farther south into the state, and dramatically shrinking our “mix” areas. We think we can see snow all the way down to US 50, with rains south of there. Snows likely will be in the coating to 2 inch range, although between I-70 and US 50, we might be able to see a few areas push closer to 3”. Liquid equivalent precipitation will be from a few hundredths to about a quarter of an inch. The low still looks to track south of the state, at this time, and that is what is leading us to expand the snow totals south…the warmer air just does not have a chance of getting into the region very far, giving this continued track. Coverage of at least some precipitation for the Saturday night/Sunday midday period remains at 80%.

Dry and cold again for Sunday night and Monday, but winds Monday do shift back to the south, so we should see moderating temps. The strong low we talked about 24 hours ago for the Tuesday-Wednesday time frame remains very strong, and the track still right over the state. Rain totals Tuesday can be from half to 2 inches and we do expect some thunderstorm action. Strong, gusty winds will be a part of this system as well, further enhancing its overall strength. Cold air rushes in quickly behind the front for Wednesday, coming in fast enough hat there likely is still some moisture lingering over the state. With the sharp temp drop, it is conceivable that we see some accumulating snow. This could be a significant snow event, if the track changes a bit, but for now we are not going to talk up the snow that much. Stay tuned. This system will bring significant moisture and a major change in the temperature pattern. Also, winds pushing 40-50 mph will come in on the backside, so we won’t rule out wind damage, and we will have to talk about the potential for dangerous wind chills for midweek next week. The map shows one estimate of precipitation around midnight next Tuesday night.

Dry air is back to finish next week for Thursday and Friday. WE are making no changes to our extended forecast window this morning either, with a chance for two, or perhaps three systems in the 11-16 day forecast window, including a couple of Alberta clipper like systems, with limited moisture but strong winds and cold air.