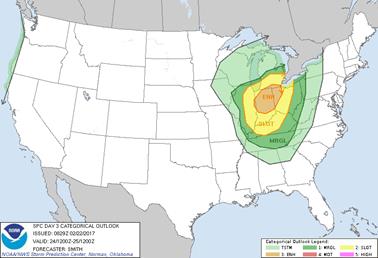 Sunshine failed to materialize over sections of the state yesterday as warm air produced some decent low to mid-level cloud cover. Still, temps pushed to some of the warmest levels we have seen out of this warm push. But, big changes are coming our way. We expect more cloud development and thickening today as moisture gets closer to the state. Scattered light shower action starts to nose into the state late this afternoon into this evening, as a warm front sets up over northern Indiana and lifts north. The rains will be generally light with coverage at about 60%. Totals will be mostly a few hundredths to a quarter inch, and like we have stated previously, will be toward the higher end of the range the closer you get to the MI line. 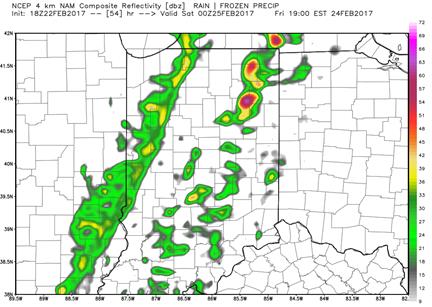 Tomorrow we see strong southwest flow in across the state ahead of the approaching cold front. We look for clouds to break up quite a bit and several good hours of sunshine to be in over most of the state. That will be key to watch, as we already have the national severe storms center putting us in an enhanced area of risk for severe weather tomorrow afternoon. In our opinion, the ability of that severe weather to develop will hinge greatly on how much sunshine and how much heating we see over the state ahead of the cold front’s arrival. This is a nearly perfect set up for some strong weather, with the most likely concern revolving around hail. Storms and heavier rain develops later tomorrow afternoon and goes into tomorrow night. Rain totals can be an additional .25”-.75” with coverage at 80%. The potential for the heaviest rains will be over the eastern part of the state, particularly east central and southeast Indiana. Much colder air comes in behind the front, but will not arrive until the moisture is actually gone with the initial frontal passage. The maps above show the severe weather areas of concern for tomorrow late afternoon, and an estimated radar set up tomorrow around 9-10 pm.

On Saturday, we see cold air overspread most of the state, with temps at or below freezing all the way down through the US 50 corridor. WE still see potential for some lake enhanced snow over the northern third of Indiana, but the threat may not be as dramatic. Mostly that threat will be over far northern counties in north central and NW Indiana, and only through Saturday afternoon. By Sunday, south winds will have returned and we see temps back in the 40s over most of the state, and we could be pushing 50 already I southern Indiana.

Monday a few scattered showers move in over southern Indiana with a few hundredths to .2” potential from I-70 southward. Coverage will be nearly 100% of southern Indiana with these showers Monday, but they are honestly just a precursor of a much bigger system still on the way for late Tuesday and Wednesday.

Ahead of the midnight hour Tuesday night we start to see the leading edge a very powerful circulation moves into west and southwest Indiana. Rains will become heavy very quickly between midnight Tuesday night and sunrise Wednesday, spreading over 90% of the state. The heaviest rains now look to be in central and especially southern Indiana, and should be exiting by midday to early afternoon. Rain totals can easily be from half to 2” with coverage at 75%, and another 20% of the state can see up to half an inch. This system likely triggers some flooding in central and southern Indiana, purely due the fast rate of rainfall and the quick moving of this event.

Another push of colder air comes in behind that system for early march. However, temps will not be quite as chilly as what we see this Saturday, meaning that we are only back closer to normal, and likely only for a day, before we start to creep back higher. We finish the rest of the 10-day period with temps mostly normal to above normal and dry weather.

In the extended period, Models are trying to bring a system through around the 6th that passes by to the north of the state. However, there is a though process that the system will be strong enough to trigger a deep trough dig in the upper levels of the atmosphere over the eastern third of the country, and we will see a major push lower in temps. While we have been watching for a cold air push straddling the 10th and lasting for 4-6 days for a while now, we also think that the system moving through around the 6th is not the right “type” of system to trigger the upper level flow change. So…at this point we are not getting too worked up about the moisture potential in the extended window, but rather watching for cues about something that triggers the jet stream to start to dig south. We suspect there will be a surge I cold air coming across the north pole that will start this move…and right now, we are looking for most signs of that particular air mass starting to move. Stay tuned. In spite of how it has felt recently…we don’t think winter is quite over yet…and cold air will come back in spectacular fashion…even if only for a handful of days.