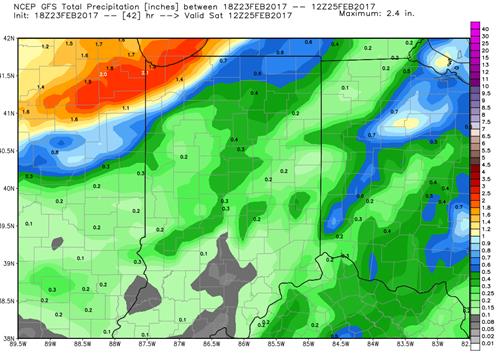 Rain moved through the northern part of the state last evening through the overnight, and today we have one more lull in the action before a strong cold front sweeps through later this afternoon and tonight. That front will have the potential to trigger some strong to severe weather, and we continue to be in an enhanced threat area for severe weather development. Temps will be well above normal today, fueled by strong southwest flow ahead of the cold front. . Storms and moderate to heavy rain develops late this afternoon and evening, continuing through the midnight hour. The best threat for strong thunderstorm action is in and around sunset, with chances falling off quickly thereafter. We think small hail is the greatest threat, while others are pointing toward gusty winds. Either way, rain totals look to be from .25”-.75” out of the cold frontal passage with coverage at 80%. Much colder air comes in behind the front, but will not arrive until the moisture is actually gone with the initial frontal passage. The map above shows total precipitation through tomorrow morning. The heavy action in NW Indiana has some residual from last night’s action, and is not representative of today’s precipitation alone.

Tomorrow, cold air overspreads most of the state, with temps at or below freezing all the way down into the southern third of the state. These will be the coldest temps in several weeks. Some moisture lingers in a wraparound pattern over the northern part of the state, and we do have winds coming down the fetch of Lake Michigan just right to trigger a little lake enhanced snow. Accumulations are not likely in most areas, but we need to keep an eye out for some minor accumulations in the norther tier counties. By Sunday, though, we still look for a quick reversal with south winds returning. That will moderate temps dramatically, and allow for significant warming through Monday and Tuesday.

Our next system still is on track for Tuesday and Wednesday. Light rains to start, but then moderate to heavy rains in for later Tuesday night and Wednesday. Rain totals combined are in the half to 1.5” range and we don’t want to rule out some 2” potential. The chances for the heaviest rains and the flooding remain over central and southern Indiana.

Dry by next Thursday and that dryness holds through most of the rest of the week. However, we can’t rule out a few scattered little showers (rain south, light snow north) on Friday. The upper level wave is highly unorganized…so we don’t expect it to really turn into anything significant.

Temps from late next week through the following weekend remain mostly normal to slightly above. We see no major below normal cold snaps in the 10 day window. But, we do harbor some concern still for later on in March (see our prior day’s discussion).