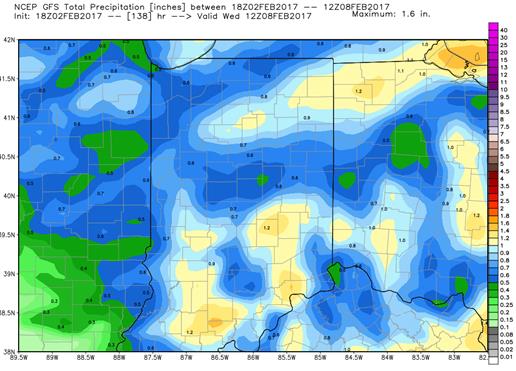 Strong high pressure dominates for Friday and Saturday. Clouds may increase late Saturday afternoon. A weak flow around the backside of high pressure exiting the deep south may trigger some widely scattered showers over southern Indiana on Sunday, but most of that action stays south of the OH river, and we look for a drier outlook for Saturday night and Sunday than we have recently. In fact, coverage of moisture in that period likely will be under 20% of the state, with amounts a trace to a few hundredths maximum. Most of the state will be dry through Sunday.

Dry weather kicks off Monday, but by midafternoon we see action working into the southern half of the state, as our next low seems to want to eject northeast of the central plains about 12 hours earlier than we previously were looking for. This will bring rains up to .25” in from I-70 southward after 1 PM through early evening. The rains continue to expand overnight to the north and east, and will bring .25-.6” rain totals from sunset Monday through 3PM Tuesday to about 70% of the state. Wave number two kicks off Tuesday late afternoon and goes through Tuesday night. Heavy rain and thunderstorm action will be in over the southern half of the state after 3pm Tuesday, and will lift northeast through midnight. Rains south of a line from Portland to Terre Haute can be from half to 1.5”, while north and east of that line we see .1”-.6” potential. Cold air races in after midnight Tuesday night, and will be in before all of the light, lingering, backside moisture is gone. This should promote snows of a coating to 2 inches over about 70% of the state to start Wednesday morning with higher amounts possible north, thanks to strong lake effect winds. Winds next Wednesday will average 20-40 mph statewide. With the cold air blasting in, wind chills will be a problem next Wednesday. The map above shows total liquid precipitation through Wednesday morning, when we see a switchover to snow.

Dry Thursday and Friday. Cold for Thursday, but winds shift to the southwest for Friday and will promote moderating temps and a warm front pushing north. We cant rule out a few showers in northern Indiana near the MI line overnight Friday into Saturday as the strong south winds overrun that warm front. Totals will be mostly minor and coverage will be less than 10%. More encompassing rains move in Saturday evening through next Sunday, as a cool front swings back in from the west/northwest. Rain totals can reach .25”-1” over 80% of the state in an 18-hour period starting around sunset Saturday night the 11th.

In the extended window, only one system is likely to hold together as we see it right now, a strong cold front for late the 15th into the 16th. This looks like it can be a predominantly rain making system at this point, as the low shows excellent south winds ahead of it, pulling moisture of the Gulf of Mexico. Rain totals an be from half to 1 inch, coverage 80% of the state. Models also suggest a strong upper level ridge over the western half of the country. However, its impact on the east is up in the air. If it stays stationary, that likely opens up a super highway for cold air do dive south in over the eastern third of the country, including Indiana. However, of the ridge moves or expands east…we could easily see the last 10 days of February look like the middle of January here…well above normal. The precipitation pattern looks active either way…but what type of precip we get…that depends on the temps.