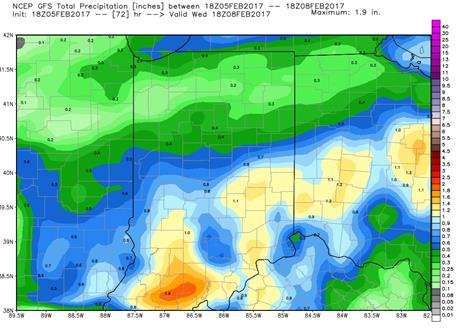 A few tweaks to the forecast here this morning, as our next wave does not look to bring quite as strong of wind with it. Today will be dry over a good chunk of the Hoosier state. We do see some scattered light precipitation trying to develop very late this afternoon over far SW Indiana and trying to build northeast, but it will be very late in the day and more of a story overnight tonight. Southwest winds are moderating temps today, and that moderate continues ahead of the arriving cold front tomorrow. That cold front brings rains in to the state from late tonight through the entire day tomorrow. Rain totals will be mostly from .25”-.75” with coverage at nearly 100%. However, the threat of heavy rains is not that impressive at this time. Also, while it becomes breezy through the day with first southwest winds, then northwest, we do not see winds nearly as strong as we feared late last week for Tuesday and especially Wednesday. The map above is total precipitation through Wednesday midday.

On Wednesday, cold air comes in to the state, with strong northwest flow. However winds likely will be from 8-16 mph across the state with some gusts to 20, rather than sustained 20-40 mph winds or more that we were concerned about last week. Snow also will likely not be a story…with most moisture already long gone by the time the cold air arrives. We can’t rule out a few flakes, especially in northern Indiana with some lake enhancement, but generally, we have no accumulations anywhere.

Strong high pressure is in for Thursday, Friday and most of Saturday. Colder air will be in for the beginning of that period, but southwest winds return Friday afternoon and Saturday, bringing moderating temps again. WE like temps next weekend to be above normal.

Our next system arrives next Sunday with a low lifting right through the state. This will trigger rains of .1”-.5” over about 80% of the state. This rain will move through and be out of the state by Monday morning, before cold air arrives. WE may see a little bit of action with the warm front ahead of the system on Saturday morning along the Michigan line…but it is not major enough to warrant more than a mention at this point.

Following next Sunday’s system, we are dry for Monday through Wednesday of next week, with temps normal to slightly above normal. WE do not have a major warm push, but by the same token, there is no massive cold air incursion behind next Sunday’s cold front either.

In the extended window, it looks like cold air will not dominate the state enough to push us well below normal. That would lead to more rain in the extended window, with a weak front possible around the 16th, and a stronger front for the 20th. The front on the 20th could have half an inch or more of liquid equivalent precipitation, and might have the potential to draw some colder air down again out of Canada.