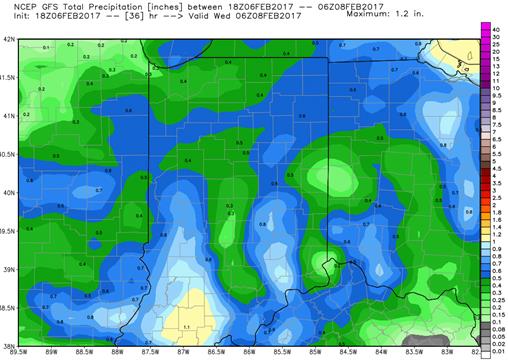 Rains fall over the state today, after starting to push in last night. Our rain forecast remains unchanged with .25”-.75” likel
y with 100% coverage. Keep the umbrella handy, as it will be a damp day. Winds from the southwest will keep temps bumped up today, well above normal, in the 50s and even low 60s down south. The best thunderstorm potential developed last night as the action moved in, but we won’t rule out the potential for a few rumbles here and there through the day. Moisture will be tapering off later this afternoon and evening, but full stoppage likely will not be seen until closer to or just after midnight. The map above shows cumulative rain totals for this system through tonight.

Much colder air is on the way in for tomorrow. However, the cold air does not come in fast enough to raise concern about rain ending as snow. That being said, as we move into the afternoon hours, we see another tail of moisture pushing in over central Indiana that may trigger some snow. Liquid equivalents are a few hundredths to .1”. That would be enough to warrant discussion about minor accumulations of a coating to an inch from midday through evening tomorrow over central Indiana. We don’t think action goes any farther north than US 24, and temps would stay warm enough to trigger sprinkles south of US 50. But in-between, look for potential trouble tomorrow afternoon for any commutes or travels in central Indiana. Temps will be falling through the day through the 30s into the 20s. Overnight lows will be rather chilly. North winds will be fueling the cold air surge, but should not be overly gusty, averaging mostly in the 8-16 mph range.

The coldest day will be Thursday as high pressure sets up over NW OH. Temps will be normal to just a bit below. However winds switch to the south behind the high very quickly for Friday and that will lead to moderating temps. With sunshine Thursday through Saturday afternoon, we should see a nice rebound in temps into the weekend, with highs pushing back into the 40s.

Rains are back for Saturday night through Sunday afternoon. Moisture totals are not that impressive, but it will be damp. WE look for .1”-.4” rain totals with coverage at 80% of the state. These will be gentle light rains.

Dry for Monday through next Wednesday. Cooler air is in briefly behind the weekend system for Monday, but temps then go back above normal for Tuesday and Wednesday. We should see plenty of sun through that period.

Our next system for the 16th looks a lot more interesting this morning. Low pressure is tracking farther south and east, and that may drag moisture in with some cold air. AT this point, we see an increased potential for snowfall Wednesday night into Thursday the 16th. We want to see another confirming model run or two, but this is much less cut and dried than 24 hours ago. Moisture totals still look to be mostly .25” to .5” or less, but if all snow, that would be a significant accumulation in a winter with very few snow events so far. Stay tuned.

The rest of the extended window shows not major changes, with only one front around the 20th. IT still looks to be a nice sweeping front with potential for half an inch or liquid or perhaps a bit more. Mostly dry behind that wave.