Cold air is in over the state today. Moisture will stay at bay through most of the day, but we will be transitioning back into a fairly active pattern through the weekend. Moisture continues to ease north through the state through Saturday morning, starting in southern Indiana where it will be predominately light rain, and working into central Indiana, where it can transition over to a mix of rain and snow. We don’t really have a concern about major ice at this point, but it will be something to keep an eye out on in the northern half of the state later Saturday into Saturday night. Sunday heavier rains develop and try to move in, especially later in the afternoon and at night. These rains continue off and on through most of Monday and Tuesday. These will not be constant rains, but there is a threat through the entire period. All told, from tonight through Tuesday we can still see moderate to heavy rains of .25” to 1 inch, with coverage at 80%. We are not super concerned about ice through most of this pattern, but still, there can be some slick spots in the central part of the state tomorrow.

Drier weather is in for Wednesday through early Friday. Then late next week we see another front working in from the west that can bring .25-.75” rains. But, we are still talking liquid precipitation at this point. That means through the next 10 days, we can easily see 2 inches or more of rain. Rivers and streams are already at or near capacity now…so we have a valid concern about flooding and standing water going forward, especially over the northern half to third of the state.

No change in the extended period, with another strong front bringing half to 1.5” rain potential for the 22nd and 23rd. A major warm up will come ahead of this system, and an equally impressive shift to cold air comes behind, with the arrival of an arctic high. More precipitation likely arrives toward the end of the 15 day period, meaning our active pattern holds right on into the turn of the month, even though temps are mostly above normal for the next 10 days. 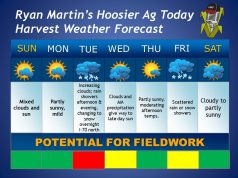