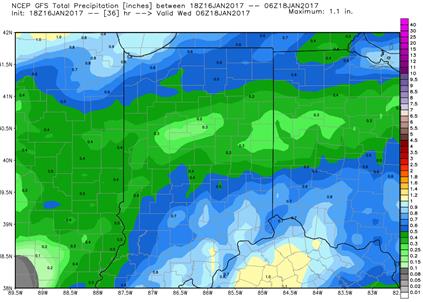 While most talk is of the impending “January Thaw”…we continue to see a very, very active precipitation pattern across the Hoosier state in the next 10 days. Residual cloud cover holds over the state today as our major precipitation maker leaves the area. We see lingering rains over the state through at least midday, adding a few tenths to as much as half an inch of moisture this morning through early afternoon. Coverage of this additional rain will be limited to about 40-50% of the state. Temps stay mostly normal to above normal in the wake of this system. The map above shows cumulative rainfall through midnight tonight.

Clouds will try and break some for sunshine tomorrow and we see better sun potential into early Thursday. However, another disturbance comes in for late Thursday afternoon and evening into Friday. This will trigger some minor rains Thursday night, but those minor rains blow up into significant rains for Friday. All told, we are looking at .25”-.75” rain totals with some local areas pushing closer to 1 inch from Thursday night through Friday. Coverage will be around 90% of the state. This will add to already wet conditions through the state, but with soil conditions not really frozen, we should see good moisture movement away, and no major flooding issues. Still, watch for rivers to rise once again.

This weekend will be dry to start with no new moisture Saturday through early Sunday. But, Sunday afternoon through Monday we see yet another wave moving up from the southwest bringing in moderate rains. Another .25”-.75” of rain potential will be seen from late Sunday through Monday, coverage at 80% of the state. The low will track right across the state from southwest to northeast.

Colder air comes in behind that system and takes temps down closer to normal for Tuesday Wednesday and Thursday. In that cold air, yet another system comes in for Thursday into Friday. Moisture is not as impressive, but it does come in with colder air already in place. This little wave could bring a mix of rain and snow, and perhaps some better snows to the north, more rain to the south. Liquid precipitation equivalent looks to be mostly under a quarter of an inch, but with the potential for mixed precipitation…it still could yield a bit of a mess. That system draws more cold air down behind it as we head toward the end of next week.

That cold pull is important, because in the extended period we see cold over a large part of the country as a strong front leaves the plains closer to the 30th. This may lead to our first good snow system in a while moving toward the state around the turn of the month. There are a lot of moving parts here, but that will be something to watch for, as we continue to believe that this “January thaw” is only a short term phenomenon, and we will eventually “pay” for this warmth with a return of brutal cold later down the line. IF we have snow cover and continue to see a very active pattern when the cold air returns…it could make for a very interesting several week period.