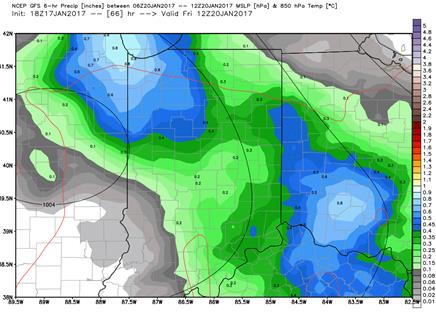 Mostly dry weather in today through the first part of tomorrow. We have no basic changes to our overall outlook. WE should see some sunshine today with milder air, but with all the moisture that we have received in parts of the state, fog and low clouds will also be a common issue to deal with.

We continue to see our next disturbance coming in tomorrow night and holding through Friday. Moisture is minor enough to start tomorrow night, but blossoms into a significant rain maker for Friday. Rain totals still hold in the .25”-.75” range with coverage at 90% of the state. Minor flooding will return to the discussion table in many areas.

Dry for Friday night, and that dry air holds though Saturday and the first part of Sunday. We have our next system arriving later Sunday afternoon, strengthening Sunday night and continuing through Monday. Rains total another .25”-.75” of rain potential will be seen from late Sunday through Monday, coverage at 80% of the state. Our track of the low remains right across the state from southwest to northeast. The map above is a snapshot of Friday morning, around 6 am.

Later in the 10 day window, our pattern looks similar to our forecast 24 hours ago. Colder air comes pushes in for Tuesday, taking temps down closer too normal for midweek next week. For Thursday we have another frontal boundary moving in that can bring some minor precipitation, mostly a few hundredths to a tenth or two off and on for Thursday into Friday. Coverage does not look all that impressive, mostly around 40%.

In the extended window, we see another front coming out of the plains around the 27th-28th that can bring some snows, as cold air is already in place. However, the rest of the extended window shows a clipper like system around the 2nd of February, and then a major upper level ridge developing over the western US. That is a new wrinkle on one model…and one that will not lead to a major change in our forecast yet. But, it does illustrate the significant model uncertainty in the pattern once we push into February…and a lot of flip flopping on models may ensue. WE are going to continue with our cold bias for now.