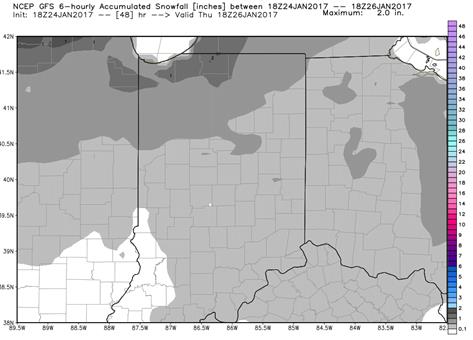 A low pressure circulation passes by to the north and west of the state today. A weak cold front sweeps through the state attached to that low. This may trigger a little bit of light rain over the region. Coverage is not spectacular, at roughly 40% of the state. Clouds will be a significant player in the state today. Overnight tonight into tomorrow, colder air dives in, and we could still see some wrap around moisture work into that cold air. This may set up for some light snow over the northern third of the state with a light coating to at most an inch. Lake enhancement will continue through the day tomorrow adding to snows in extreme north central Indiana and up into Michigan. Meanwhile the precipitation tomorrow will not push into the central and southern part of the state. In fact, we can see sun break through in southern Indiana. The map above shows snow accumulation through tomorrow midday. As we previously have mentioned, this model is too aggressive with its snow spread to the south…we like the best chance of snow to be from US 24 northward.

The rest of the 10 day period looks dry. Sunshine breaks through for Friday and holds through the weekend and next week over all of the state. Temps will be closer to normal than we have seen recently, but will not be below normal. In fact, a temp range from highs in the upper 20s to upper 30s will be seen over most of the state, with 40s likely in southern Indiana through the period. That is an average of a little above normal for January into February.