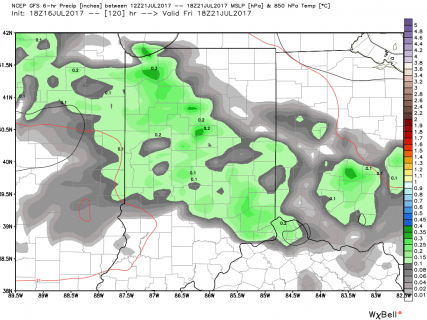 A mostly dry start to the week this week, with no serious precipitation action until Thursday up north, and then over more of the state on Friday. The stagnant remains of an old frontal boundary over central Indiana lit up a few showers and thunderstorms yesterday, and we won’t completely rule that out today either. But, in general, we are looking for fairly nice, dry weather over the next 3 days. Temps will be climbing through midweek.

Thursday, we have some moisture moving into the northern third of the state, an offshoot of a frontal complex that is more bent on hitting MI and the great lakes region. This will trigger rain totals of a few hundredths to perhaps .3” over areas from US 24 northward, and in far NW Indiana, we can see some rains over half an inch early on Thursday in southern Lake and southern Porter counties. The rest of the state stays dry. On Friday, a slow, sagging trough moves through the rest of the state, bringing rain totals of .1”-.5” with coverage at 50%. These rains will leave a lot of areas wanting for more. The above map shows a snapshot of potential precipitation at midday on Friday.

The weekend shows an active precipitation track, mostly over the northern half to third of the state through Saturday and most of Sunday. Areas north of I0-70 can see rain totals of a few hundredths to half an inch over both days combined with coverage at no better than 60%. Southern Indiana continues with no significant ran chances. Temps remain above normal.

We dry down again for next week, with no significant rain chances anywhere in Indiana for Monday through Wednesday. In the extended window, we do have a weak front moving in around the 28th with some potential rain totals up to half an inch and coverage at 60%, but the rest of the 11-16 day forecast period is dry, with temps above normal. While we still do not see what we would term “oppressive” heat building in, we do think that all of the coming 2 weeks will be above normal to some scale, and highs from the mid-80s to low 90s will be pretty much expected for most of the rest of the month…beginning with our slow build this week.