The short term forecast has no significant changes, but we are making some tweaks to the extended forecast this morning.

Today will be dry as high pressure moves off to the east. South flow comes up the backside of the high and will allow temps to climb some today. We should see the mid to upper 80s on most of the state, and a run to the lower 90s will be likely down near the Ohio River. IT will be a warmer day than we have seen to start the week so far. 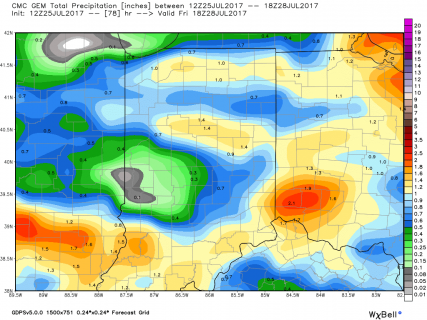 A good front arrives Thursday morning in NW Indiana and slides southeast across the state through the day. New intel shows that there is a bigger concern about strong thunderstorms and heavy rain in over parts of the state. Right now, the best threats of heavy rain will be inside a zone bounded by a line from Fort Wayne to Warsaw to Kokomo to Portland. In that area, there is potential for some 1-2 inch rains or more. But, we also do not want to finesse the forecast too much and have some issues develop, so our overall rain totals will be from .25”-2” with coverage at nearly 100% of the state. Now, the upper end of the range will be limited to small scale areas but this forecast does promote a chance of heavier rains than we have talked about up to this point. The map above shows potential total precipitation from the is event through Friday morning.

One minor tweak to the forecast comes from this Friday. We look at Friday as a transition day, and there may be some lingering moisture over parts of the state. While we expect the sun to try and work through in many areas, we are leaving the door open for some spotty leftover shower action, nothing more than a few tenths here and there, and coverage no better than 25%.

Completely dry from this Saturday through next Friday. Sunshine, blue sky and gradually warming temps will be the focal point of that 6-7 day dry stretch.
In the extended period, our next front looks to arrive now later on the 5th and go into the 6th. Rain totals still look to be from .25”-75”, which is a slight boost on the top end of the range. But, this system is also delaying its move into the region too, which aids in the strengthening precipitation forecast. Coverage from this front will be around 80%. Behind that front, we are seeing some signs that another front may try and move in closer to the 8th. This is a stark change from other model runs, and for that reason, we are not making the full push to change the forecast for that front. But, if it holds on model runs from this point on and gets some confirmation from other runs, we will move the forecast accordingly, and may be set up to get decent moisture into the state as we move toward mid-August.

Temps over the next 2 weeks will be normal to above normal, but no oppressive heat is seen coming anywhere close to the state.