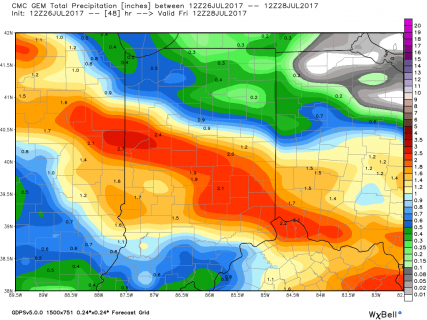 As we expect much drier air to move in going forward, tomorrow will be a bit of a transition day. The Sunshine tries to poke through behind the front, but we suspect there will be some minor moisture still lingering over the state. So, while a large part the state will be dry, we are going to keep an eye out for scattered showers over about 30% of the state. We likely see more clouds on Friday than we do the rest of the week following.

We will be dry over the entire state from Saturday through next Thursday. Several strong high-pressure domes will slide across the region, giving plenty of sun, and temps normal to above normal. It will be likely the 2nd longest continuous dry stretch for the state this summer.

Our next front, as disorganized as it is, is looking to speed its arrival a bit later next week. We are having to put showers back into the forecast for next Friday afternoon (4th) even though they will have coverage of only about 50% of the state, and that could be limited more to the northern half. A second wave of action may try and still work in for late the 5th into the 6th. Moisture totals look to be mostly from .25”-.6”, but the highly disorganized nature of this set up leads us to be less confident on moisture totals. The overall extended period continues to project a wetter bias, with scattered showers possible off and on from the 5th right on through the 10th. Moisture is not overly heavy, but we are not getting a lot of guidance that things clear out either. A strong front is developing around the 11th over the great plains, so that would hint at a good strong line of showers and thunderstorms here around the 12th into the 13th. If that front is as strong as we suspect, the light, hit and miss stuff ahead of it in the 11-16 day window likely would not be as prolific.

So, with the uncertainty in the extended period, we are going to leave our forecast alone out there, with an eye for better moisture changes as we move toward mid-August.