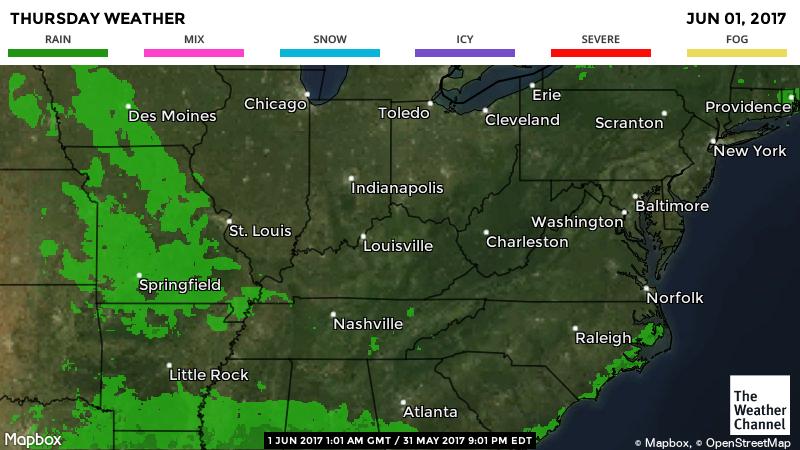 Another dry day today with seasonal temps as we kick off the month of June. Tomorrow looks drier as well, as precipitation likely holds off until late in the afternoon or even tomorrow evening.

We still have significant rains moving across the state from tomorrow night through Sunday. Rain totals combined will be from .5” to 2” with coverage at 80% of the state. Southwest Indiana gets the least precipitation, as it may be later Sunday afternoon until we see good, solid shower potential get in to that quarter of the state. Central and northern Indiana get the best rains. However, this moisture looks to come in a fairly usable manner…with no more than .25”-5” at a time over the 60-hour period. We also see less of a threat of thunderstorms, which also will decrease the potential for excessive rains. While any rain at this point is still seen as too much in a large part of the state, this system looks much better than it did for us a few days ago

Dry weather is back for nearly all of next week. We start the week with cooler air and north flow around the backside of the weekend storm complex. Clouds may hold firm for a while in there, but will eventually break down later in the day. Then dry weather continues Tuesday through Friday. A system moving out of the great lakes into OH and the Mid-Atlantic states at midweek will miss us with any kind of worthwhile precipitation, but we could see some clouds in there, especially over the eastern part of the state Wednesday into early Thursday.

A minor front sweeps into the state to start next weekend, with showers arriving Friday night and lingering through midday Saturday, the 10th. Rain totals are not impressive, mostly .05”-.4” with coverage at 60%.  But, later Saturday we should see sunshine return, and Sunday (11th) looks good.

In the extended window, the pattern may trend drier for the 12th-15th. Some models are trying to keep moisture close, but we think that the atmosphere will have to reload during that period for a large scale low pressure system for the 16th and 17th. That system, if it develops as we see right now, will bring half to 2 inch rains to the entire state. However, its early, and track of the low will be key.

Outside of the cooler air early next week, temps will spend most of the upcoming 15 days near normal.