Dry today and tomorrow with strong high pressure over the state. Temps remain cool, at least for today. We may start to warm things up a bit tomorrow as the flow turns more southwest. 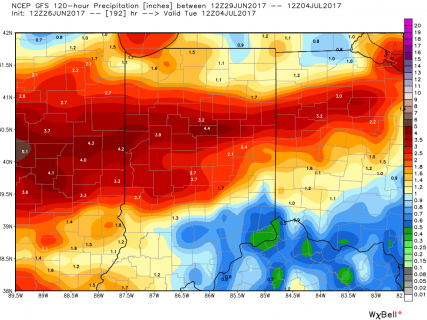 We still project a very active second half of the week. No change in arrival for our next strong front on Thursday. We look for .25”-1”, and a second surge Friday that can bring just as much. The chance of rain diminish some now for the 3rd push over the weekend, but at this point, we will not completely rule out rains either. So, overall, we are leaving our combined totals for Thursday through the weekend at .5”-2.5” of rain with 100% coverage through the state. However, the upper part of the range (>2”) will be only triggered by heavy thunderstorms. We think the best thunderstorm threats are Thursday and Friday, so that means if you do not see heavy thunderstorms or stronger rains during the first part of the rain period (Thursday-Friday), you likely will not be in the upper part of the rain potential. So, watch the first half of this period the closest.

With the weekend having less rain, it looks like we are just pushing that energy back a day, with stronger rains developing Monday into early Tuesday. Rain totals can be from half to 1.5” over 80% of the state Monday. Thunderstorms are again a large part of the equation to start the week. That puts 6-day rain totals from this Thursday through next Tuesday in an impressive territory (see above map).

The rest of next week looks drier. WE can’t rule out some heat based showers, as a strong area of high pressure looks to dominate, but have some light moisture trapped underneath. That pattern continues through most of the extended period, with an upper-level ridge trying to form, but still having some residual light moisture trapped underneath. For that reason, we are not talking up riding on a large scale yet, but we are watching this minor moisture closely. If it dissipates (like we think it will) that leads to a long-term hot, dry pattern through mid-July. If it can hold on, that means hit and miss showers over the state through the week after next, with not a lot of big time rains, but enough to keep us from saying it will be dry as well.