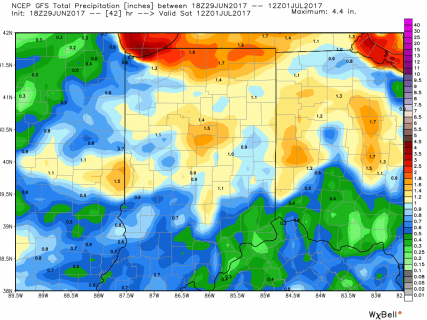 Rain will be with us off and on through the entire day, as a cold front sweeps through. The strongest action developed last night and will taper off this morning, so we generally are looking at showers today, with only a few thunderstorms this morning. Thunderstorms may retire later this afternoon in central and southern Indiana as the front slides in down there. Moisture is not completely done over the state until after midnight tonight, but we do look for it to be pretty much done by tomorrow morning. Rain totals through tomorrow morning are shown on the map.

Clouds and a few renegade showers may try and hold over the state tomorrow morning through midday, but the sunshine and dry weather is expected to work in for a large part of the weekend and next Monday. Temps should remain mostly normal to above normal over the region.

A strong system arrives for next Tuesday, and we have a concern now that it lingers through Wednesday and even into early Thursday. The initial read on this system is for rain totals of .5”-1.5” over about 80% of the state, and some wrecked plans for the Independence Day holiday. However, if the system slows and lingers over the eastern corn belt, that could add another half to 1” to the overall rain totals. So, next week looks to be at least wet, and potentially very wet. However, we may end up needing that rain, because a much drier pattern ensues after that.

Late next week, through the following weekend and the week after next, strong upper-level high pressure looks to develop with a ridge forming over the nation’s midsection. This should promote a mostly dry 11-16 day window with temps above normal. The only concern we have there is whether any moisture gets trapped under the building ridge. That concern has lessened over the past couple of days but is not gone completely. Even if it completely dissipates, we think that heat based thunderstorms will be something that increases in potential for the extended period over most of the state, which will give at least some hit and miss threats of moisture. So, while the pattern is drier, we do not think the spigot turns completely off.