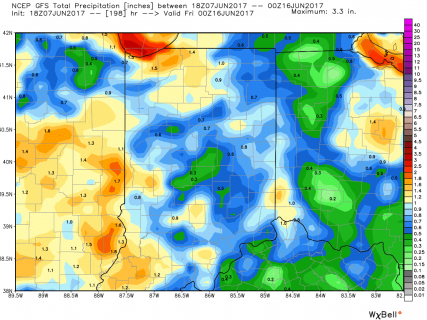 Dry weather continues. High pressure centered over the state this morning eases off to the north and east. We should see a return to strong south and southwest flow behind this high later this afternoon and tomorrow, with a big warm up coming into the weekend. There is no rain in sight through the weekend and the first half of next week. Temps will be above normal, and the sunshine dominates.

The next frontal boundary to move into the state is slowing its track east once again. We still see the front coming, but now look for no serious precipitation to develop until later Wednesday afternoon and then linger through Thursday midday. Rain totals look to be .25”-.75” with coverage at 70% of the state. The longer this front delays in its move east, the less chance we have for heavy rains, as the system matures and rains itself out farther west. As a result, we see minimal chances of strong to severe weather at this time, as those changes end up playing out farther to the west and north.

Dry behind that front for the balance of Thursday, Friday and most of next Saturday. We have a system to start off the extended period for the 18th into early the 19th that can bring .25”-.5” rains with coverage at 70%. The pattern may try and get a little more active with models suggesting another front around the 21st, and one the 23rd…but these are the same models that had much more action in the extended window about a week ago, the action which now as decreased in intensity and coverage dramatically. So, while we will likely be wanting some moisture toward the end of the extended pattern, at this time we will not promise any, as we are seeing a nice trend toward hotter and drier pattern through midmonth, and that would offer a lot of headwinds to flip back from into a suddenly active pattern. The above map shows potential rain totals for the next 7 days. Basically, all of this precipitation comes next Wednesday into Thursday.