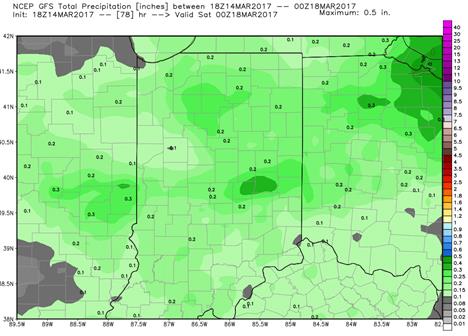 Strong north winds hold over the state today, and that will trigger some lake enhanced snow over northwest and north central Indiana through at least midday. WE do not see the snow making it far to the south, but resultant clouds will be in from time to time over the northern half of the state. Still, we should see sunshine at least on par with what we saw yesterday. Temps remain mostly below normal through the day, similar to yesterday as well.

Winds start to turn more to the south as we move into tomorrow, and that will allow temps to begin to moderate. These south winds also will be in ahead of a fairly significant frontal boundary that brings liquid back to the state for Friday. We like rain totals for Friday of .25”-.5” with coverage at nearly 80%. Our concern about precipitation starting as snow is lower at this time, as most of the precipitation starts a little later Friday morning, and then going through the entire day. The map shows total precipitation for the system through Friday evening.

Dry for the weekend through Monday late afternoon. Temps get back closer to normal, but we are less optimistic of chances to be above normal in that period, as we will sit in between storm systems in a mostly zonal flow pattern. Sunshine should be a large player through the period, however, leading to a better feel than for this week.

Scattered showers come in for Monday late afternoon and evening and go through Tuesday afternoon. The action remains mostly scattered through the period but should end up giving a coverage area of 60% with rain totals of .25”-1”. However, that 1” total will only come about with stronger thunderstorms that may develop Tuesday over the southern third of the state. This system is not inspiring a lot of confidence at the moment, and may develop further or deteriorate between now and its arrival.

Quick moving high pressure is in for next Wednesday, but then another strong front quickly moves in for next Thursday into Friday. This system comes out of the central plains and has the potential to trigger significant moisture for the end of next week. Right now we will put rain totals at half to 1” combined over the 2-day period, but it could be more, if the system slows in its progression. WE are looking at all liquid precipitation, with no snow threat, at the moment. The cold air looks to push farther north on the latest model runs. However, this is the one part of the forecast that we need to watch closely.