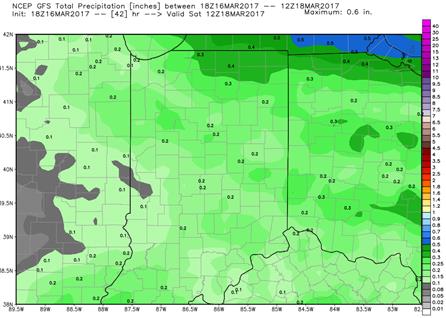 A damp Friday underway, as moisture moved into the state overnight from the west. The most interesting spot in the state this morning is in north central and northeast Indiana, as warming winds have not quite gotten there yet. A such, we are seeing a cold layer of air near the surface, while warming has happened a little sooner around 4000 to 5000 feet. So, we are seeing some snow and even a bit of sleet and freezing rain potential this morning, especially in the northeast corner of the state. Snow may accumulate up to a couple of inches there, but not really anywhere else. Rains today should bring a cumulative total of .1”-.5” over 80-90% of the state. Dry air should move in fairly quickly overnight, but clouds may not completely dissipate. With a dry weekend, we expect a mix of clouds and sun Saturday, mostly sunny skies for Sunday. Temps will be nearly normal Saturday, above normal and rather pleasant Sunday. The first map above shows total precipitation through tomorrow morning, and the second map show potential snowfall this morning through 1PM. 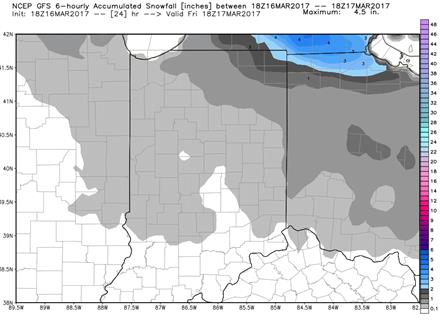 Scattered showers move into the state Monday, and then better organized rains surge through with a second wave Monday night into early Tuesday over southern Indiana. Rain totals for the entire event will be from .1” up to nearly 1 inch, although the half to 1 inch totals will be from I-70 southward, buoyed by that strong second wave of action Monday night. The thunderstorm threat looks lower for that period as we see it right now. Coverage of rain reaches 100% of the area from I-70 south, but only about 30-40% of areas north of I-70, with significantly lower rain totals.

Dry for the balance of Tuesday through early Thursday morning as a nice high pressure dome slides through. Cooler air is likely Tuesday as the leading edge comes in, but warming temps for Wednesday and Thursday. In general, we do not look for anything significantly below normal in this period.

Our next system looks to arrive midday next Thursday and then progresses through the state through Friday and we may even see some lingering moisture Saturday morning. This should be a rather moisture laden system, and rain totals can be from .25”-1”. Heavy thunderstorms can develop with the cold front late Friday as well, but for right now, they look to stay mostly just south of the OH river, and the heaviest rains may stay there too. It is still early, so if there is anything in particular we are watching in this event, it will be a shifting of that heaviest rain band northward along with thunderstorms.

We return to dry weather for later next Saturday through Sunday with nearly normal temps. In the extended window we continue to see a very active pattern, but at least this morning there seems to be a bit of a break in between major systems. We still have our first big system coming in for the 27th and 28th with potential rain totals of .25”-.75” and 80% coverage. A stronger system shows up closer to the turn of the month, around the 31st through the 1st. This system looks massive right now, with rain totals of .75”-1.5” and 100% coverage. This system also fits the mold of a classic strong thunderstorm maker as well. No matter how it plays out, we expect plenty of action for the last half to third of the month, a soil profile with ample moisture in it moving into planting season, and warmer than normal temps to start off next month