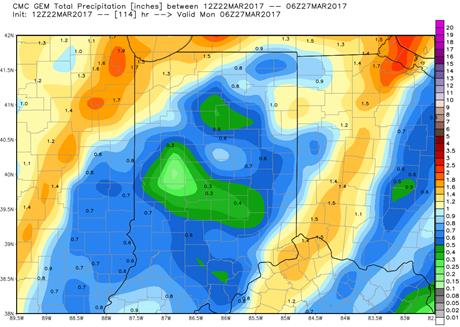 Warmer air flows into the state today as south winds come up the backside of high pressure exiting to the east. These south winds will likely usher in some clouds as well for the afternoon, as a warm front marches north. We have to watch that warm front late in the day, as it may trigger a bit of widely scattered light moisture tonight. Moisture totals will generally a few hundredths to a tenth or two, and will mostly be confined to northeast IN. Then we revert back to breezy and warm conditions for tomorrow with variable clouds across the state. We likely see good sunshine, but clouds can come and go fairly easily for your Friday. We expect no precipitation tomorrow.

A damp weekend is in store for us as a cold front slams the state Saturday and wrap around moisture holds over the state for Sunday. The threat of widespread thunderstorms for Saturday afternoon looks to be somewhat lower this morning than previously. We still think that SW Indiana can see a line or tow of stronger thunderstorms between sunset and midnight, but with that timing, those thunderstorms are likely not long lived. That also means, while we are keeping our rain totals statewide the same as we have been talking about, the threat of rains in the higher end of the range will be limited to a much smaller geographical area. Rains on Sunday will be more shower based, but still have the ability to produce good totals. For the combined 2-day period, we like rains from .25”-1.5”, with a large part of the state in the half to 1” part of that range. Coverage of rain will be nearly 100%. The map above shows cumulative rain totals through midnight Sunday.

We dry out briefly from Sunday night through Monday midday. However, we really do not see much of a chance for sun in that period, and clouds will be a dominate feature. Another quick moving wave of moisture is back in for Monday night through Tuesday afternoon. Moisture totals are not impressive, with only .1”-.5” rain totals over about 75% of the state. Rains end sooner over the northern half of the state, but may linger into late Tuesday afternoon south of I-70. We do not see any strong threats of rain for the Wednesday time period next week, but by the same token, we hesitate to keep calling the period dry. Clouds likely dominate and we will have a damp feel after having rain 4 out of the prior 5 days.

A strong storm complex begins to nose in from the west and southwest starting next Thursday, but likely will not have a big impact until Friday. That means Thursday is going to be a pivotal day. If we see clouds hold firm, we likely will only see rains through the Thursday night-Friday period. However, if clouds break and we see some significant sun, that will ramp up the threat of thunderstorms as the cold front comes in Friday. Right now we are going conservative and looking for just rain and perhaps an isolated thunderstorm for the end of next week…but we have to watch Thursday very close. At this point, rains from Thursday night through Saturday morning look to be from .25” to 1” with coverage at 90% of the state. But, those totals can change easily with increased thunderstorm threats.

No change in the extended period, with a monster storm complex exiting the central plains and tracking right over the state for the 3rd. We are keeping our rain totals at half to 1.5” for now, and continue to talk about a threat of severe weather in that timeframe. Behind that, another system sweeps in for the 6th into the 7th. Rain totals look smaller with that event, around .25”-.5”. However, the length of breaks between systems suggests we still will be quite wet with regard to soil conditions through the first week of April. 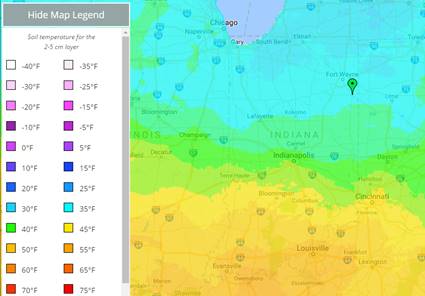 Soil temperatures have been stagnant over the past week in the north, as cold shots have limited the ability to gain significant warmth over the middle of the month. We are still several weeks out from having soil temps suitable for major work there. However, southern Indiana is getting very close to the key 50 degree threshold, and with warmer temps in over the next week, we may be ready to see some slightly more serious field work coming around.