Keep the umbrella handy today and tomorrow as rains move over the state. Rains today will be more steady and have higher totals ahead of the low pressure circulation. Tomorrow, action will be more hit and miss as we get into the wrap around precipitation. We are leaving rain totals alone at .25”-1” with coverage at 90% of the state. The map shows total precipitation through midnight Friday night. 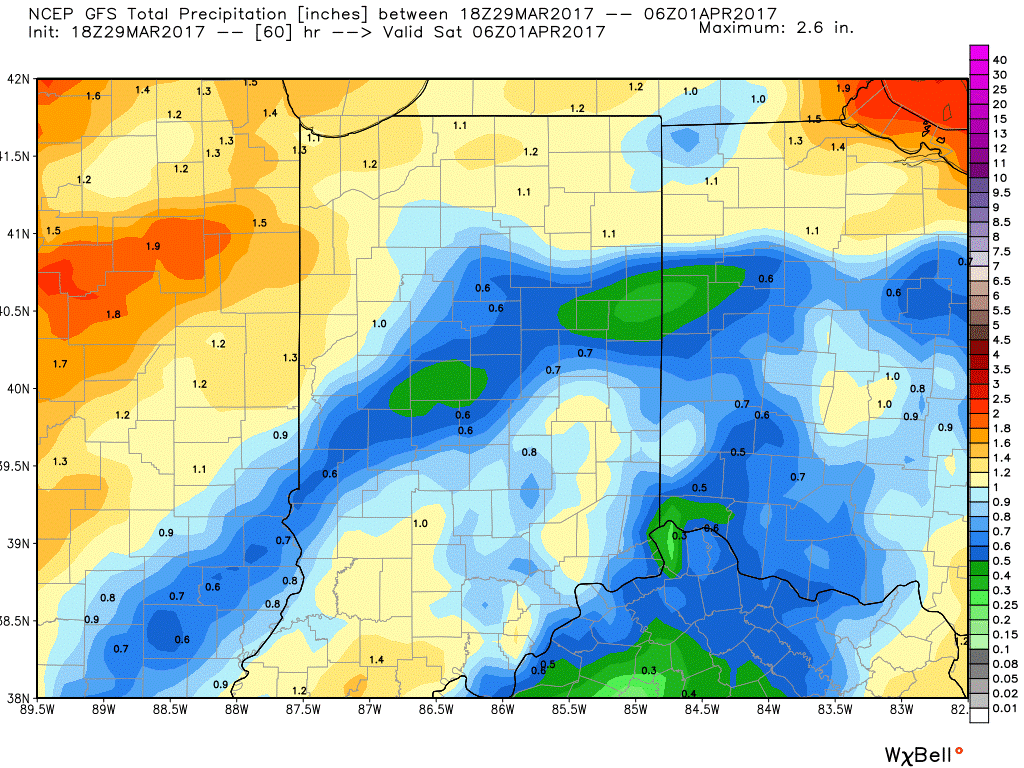 We should have a nice weekend with sunshine in for most of Saturday. Clouds will build through Sunday, especially in the afternoon and evening. We probably do get through the weekend, however, with no serious rain threat. Rains look to develop a little later Monday.

We are still looking for rain from Monday midday or early afternoon into early Tuesday. Monday morning we won’t rule out spits and sprinkles, but really do not see a lot of organization before then. WE look for rain totals still in the .25”-1” range with coverage at 60% of the state. There should be a break in the action from later Tuesday through Wednesday afternoon. Then models bring a second wave in for later Wednesday through Thursday. This is a solution much like was being seen 2 days ago. Models flip flopped a bit yesterday morning and are now back on the Thursday bandwagon. Confidence is building in that scenario. The second wave would bring another .25”-.75” of rain to about 70% of the region.

We should be dry to finish the week then for Friday into earl Saturday. WE may even squeeze out a dry finish to the weekend. But, a strong storm is lurking to the west, and we think there is potential for half to 1.5”rain totals as we start the week of the 10th, and then a second system closer to the 12th-13th.

Basically, our active pattern is still intact and we are talking about the same number of systems moving through over the next 15 days. We are just looking at adjusting timing slightly this morning on systems at midweek next week and subsequent systems as we finish the 10 day period and move into the extended window. Temps remain above normal through the period, for the most part. WE will average 5-10 degrees above normal for the upcoming 2 weeks.