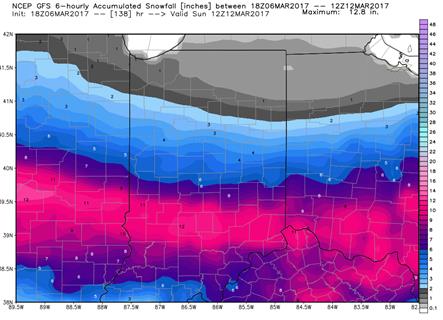 Rain today is associated with a strong cold front that will clear the state to the east by mid to late afternoon. Rain totals from last night through today should end up in the .25”-1” range with coverage at 90%. Behind this front, we should move into a drier, albeit cooler period.

Strong west winds continue tomorrow through early Thursday before calming some. That will lead to a pattern than feels colder as Canadian air slowly sags into the region. We do not see temps moving dramatically below normal, but they will stay close to normal through the end of the week. WE can see a few scattered light snow flakes early Friday morning into Friday midday, but not major accumulations.

Our next strong storm complex moves into the state for Saturday. The track of the low is key with this system. Cold air will already be in place, so any precipitation that moves in will likely be snow. This low tracks out of the central to northern plains. Right now, models do not have a set track they are sticking with. The European favors the heavier snow in central and southern Indiana, but other model runs want to move it across central and northern Indiana. Moisture equivalencies suggest that either way, the heaviest snows can be up to at least 4-8”, and some models are going much more *(see above. At this time, we are not going to promote the gloom and doom 12”+ totals that the GFS model is showing. But, the track of this snow matches up with where we think the higher totals may be, as of this morning’s look). We will watch this system closely, but for now, we think it will be a good bet we see significant snows somewhere in Indiana to start off the weekend. The map above is a snow total projection through Sunday morning. Again – we think the heaviest snows of this map are way overdone…and we are penciling in a top total right now of 4-8”…although our official snow projections will not be issued until Thursday morning.

We follow that wave up with another secondary batch of snow for the great lakes and northern Indiana next Monday night into Tuesday. These snows will be more concentrated in lower MI, but we have to keep the door open for some accumulations down to US 30. Coverage will be 70% in that zone. Farther south, we expect nothing. The rest of the week next week should be mostly dry, and cool, with colder air pushing in again out of Canada and the great lakes. This pattern holds through Thursday.

Next Friday, our next front moves in and will likely bring a significant warm surge with it. That triggers good rain for Friday into the weekend with totals of half to 1” and coverage of 80%. This kicks off an extended period that we expect to stay very active. WE see at least 2 more strong fronts in the 11-16 day forecast window.