Less windy today as we finally see the strong circulation that was to our north yesterday moving off to the northeast. However, the upcoming period still has its share of challenges to work through. Today should be mostly dry, but we see clouds moving back in later this afternoon and spreading south tonight. The best threat of precipitation from these clouds will be over the southern half of the state as we move closer to midnight. Mostly rain will be seen south of I-70, although any rain from midnight to 6 AM may try and change to snow before ending. All told, we think there is enough liquid potential to trigger a few hundredths to nearly a quarter inch of rain, and anything that ends as snow will have minor to no accumulations. 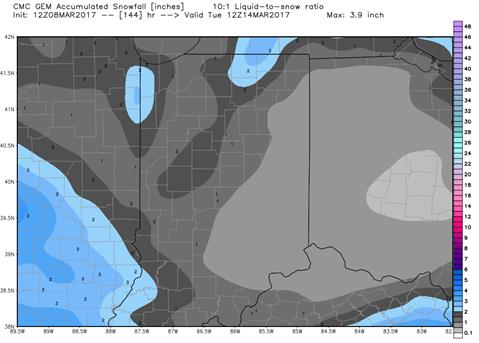 For the balance of Friday, we should be mostly dry with a minor high pressure dome trying to settle in by mid-afternoon. This will bring sunshine back to the state in a major way. However, this will also be the start of a rather tumultuous period over the state with regard to our weather from Friday night through the first half of next week. Overnight Friday clouds start to build in from the west and we see snows overspreading the southern half to third of the state through Saturday morning and midday. Snow will be minor, with a coating to an inch in the hardest hit areas. This is a far cry from what models were saying a few days ago…but still, it is snow in areas that have been very warm recently. Everything is done before sunset Saturday night. Coverage of this snow will amount to about 30% of the state in general, but perhaps as much as 70% of the southern third of the state.

Sunday looks mostly dry, but cold as the entire state starts below freezing, and only the southwestern most quarter of the state climbs above freezing through the day. On Monday, our next wave of snow overspreads the state, with a coating to 2 inches likely through Monday afternoon. We may have a reinforcing shot of cold air and moisture Monday evening, which can add another 1-3 inches from I-70 northward. All told, about 80% of the state has a chance of at least some snow on Monday, and the northern half to third of the state likely sees the biggest accumulations, with 1-4 inches possible from US 24 northward. Everything should be done, or mostly done, by Tuesday morning. The map above is cumulative snow potential, from Saturday through next Tuesday morning. 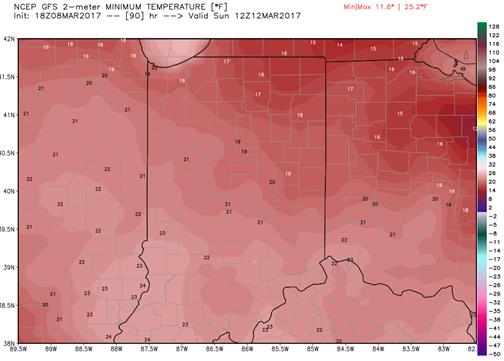 Most of the rest of the week next week is dry, and we should see temps moderate at midweek. No precipitation is anticipated from Tuesday mid-morning through Friday early afternoon. Overall, temps will go below normal this weekend, and then stay mostly normal to below normal through midweek next week. The map here shows morning low temps this Sunday morning – the coldest we will have seen in a while. A strong cold front sweeps through the state Friday afternoon and we do see rains of .25”-.75” coming through with that front. Coverage can be up to 80%. Cooler, drier air sweeps in behind the front with temps back closer to normal.

In the extended period, we continue to see at least 1 strong front working into the state, and are keeping an eye on a second. The front we feel most confident about looks to arrive around the 19th into the 20th. This low pressure track is still way too far out to nail down, but currently, it looks to bring significant rains to the state with moisture potential of .25” all the way up to 1”. There can be a snow component to this frontal complex…right now it looks to be far off to the NW…but again, we need to monitor the track of the low. A second front starts to develop in the central plains and MO valley around the 23rd. Some models take this system south of us, others shoot it northeast and put it right over central Indiana. Either way, once again we can tell the bias of the pattern is to become more active and more aggressive in the next couple of weeks.