An active weather pattern has kicked off over the region this morning and we will remain fairly active right on into the first 10 days of December (at least). Rain today will mix with some wet snow flakes up north this morning before becoming all rain by midday ( or sooner). Still, precipitation lasts through most of the day, and this stringing out of the moisture will lead to liquid totals today that range from .25” to .75” with coverage at 100% of the state. There will be some areas that may poke just above that high end of the range too, although not too many. The moisture comes to an end by midnight tonight.

Thanksgiving Day will be mostly dry, with clouds early, and then perhaps some sun by later in the afternoon. Weak high pressure may settle in over areas just east of Terre Haute by this evening. Black Friday will be back to cloudy conditions, at least over the northern half of the state, as a weak upper level disturbance passes over the great lakes. There may be a few spits and sprinkles in there, but generally nothing spectacular. The weekend will be dry with high pressure returning for Saturday. However, big changes will be on the way for early next week. 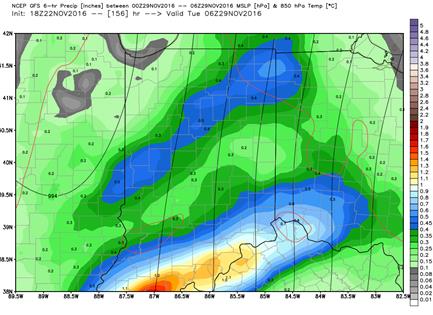 Sunday night, clouds build and our next frontal boundary arrives early Monday morning. That front initially brings moisture through the day Monday and into Monday night. IT alone would be capable of triggering .25”-.75” rains for Monday into early Tuesday. However, some models are bringing a secondary wave of action up from the southeast. There may some offshoot of tropical moisture interacting with the front (OTTO is meandering around in the western gulf…but likely does not come north), or maybe it’s just a bunch of pent up energy…but either way, a few models are bringing another slug of major rain in for Monday night and Tuesday, that could really impact the state. Right now, we are going to hold with the conservative rain totals mentioned above. But, we are looking for additional model runs through tomorrow to either confirm or deny the potential for heavier rains. IF we have to increase our rain totals with the second wave…we would be talking potential of up to 2 inches or more. So…stay tuned. We could have some big changes for Friday morning. The map above is a suggestion of potential rains around midnight Monday night. 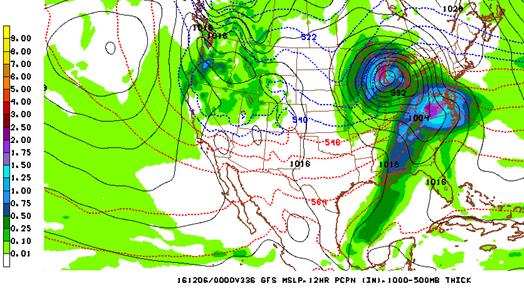 Behind that front, mostly dry weather for the rest of next week. However, we still look for another strong front, a classic winter type storm to come out of the SW US and central plains for the 5th through the7th. The current suggested track would keep the heaviest snow potential north and west of the state…but the track is far from certain at this point. But, the mere fact that we have pegged this storm for this period for the past 3-5 days and it has stayed right on course should raise a flag of concern for some pretty impressive weather as we kick off December. Temps will remain below normal in the extended window as this system develops. The map above shows a potential location of that strong storm the night of the 5th.