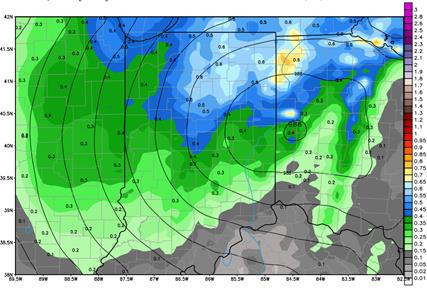 Drier weather today, although clouds will likely hold over a good part of the state. Warmer south winds will be replaced by a push of west winds this afternoon. Another strong low pressure center looks to move out of the ce3ntral and southern plains today and will stay to the south tomorrow, moving over the Deep South. This event will have moderate to heavy rains with it, but should stay clear of most of the state. Even still, we have to allow for some rain in the southern tier counties along the river through the day, with rain totals in up to a third of an inch. The rest of the state will just see clouds.

Those clouds remain in some form or another through Thursday and Friday, with full sunshine finally expected for Saturday as high pressure settles in .however, even with the clouds, we don’t think we will see anything more than a few spits and sprinkles here or there for the period.

Our next system arrives later Sunday evening and goes through Monday. This system looks significant, as moderate rains hold in through the entire 24-36 hour period. WE are going to bump rain totals for the entire system to at least .25”-1.5” with coverage at 100%. WE would be concerned that the higher end of the range may not hold…but for now we are going to stay there. Another concern will be the arrival of the cold air behind the low. The low tracks right now into east central IN and then NW Ohio as it moves to the northeast. That would bring some significant wrap around moisture in to the northern parts of the state for Monday night into Tuesday morning. IF cold air comes right in behind, there would be a threat for some wet snow in over the northern third of the state after midnight Monday night through midday Tuesday. WE are not going to jump on the bigtime snow bandwagon yet…but just know that we are watching the track of the low closely, and the timing of the cold air invasion even closer. Early next week could be a very interesting period. The map above is a snapshot of the potential set up at midnight Sunday night.

Following that, we see our next system a few days later for Wednesday night through Thursday, with rains to start, potentially followed again by wet snow. Liquid equivalent precipitation will be anywhere from .25”-.5” with coverage at 80% of the state. In the extended period, we may still have yet another frontal boundary to contend with closer to the 9th or 10th, although at this point we are not going to get too interested in that one until it gets into the 10 day window.

Temps look to be mostly near normal through the period. But, normal temps for December do ratchet down as the month moves on. The pattern looks to be rather active from now into mid Dec, with the average length of time between systems down to about 3 days. Heavy rains at the start of the period also will make systems more likely to produce precipitation as they move through…consider the atmosphere “primed”.