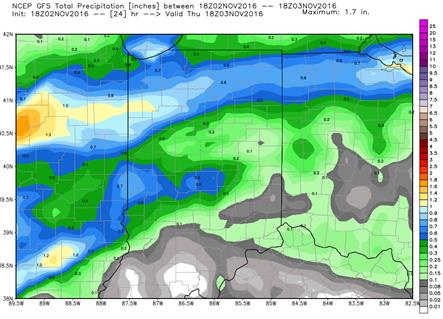 Rain moves off to the east today. We likely will be left with some shower action through the first half of the day as action sags south and east, but by this afternoon, we should start to dry down. We think that clouds will likely hang around through a good chunk of the day behind the front much like they came in ahead of it yesterday. Still, we are going to embark on a much drier pattern for tomorrow, the weekend and next week. Cumulative rain totals from last night through this morning are suggested by the map above.

At this point, we are going to keep our forecast dry all the way through next Friday. We have strong high pressure settling in here for tomorrow and the weekend, and then we transition onto the backside of the high. A second strong high is in for later next week. That period in-between high pressure dome domination sequences will need to be watched closely mostly on Tuesday. We don’t think there is any moisture developing in here…but we do see some form late Sunday through Monday come up the backside of one high and in front of the next over the eastern plains and western Corn Belt. WE think it all falls apart before it gets anywhere near us here. That will bring dry, warm air in for the balance of next week, Wednesday through Friday.

Late next Friday afternoon and evening, we see low pressure working in along and south of the OH River. This circulation will likely bring a warm front into central and southern Indiana, which will be good for some showers next Friday night and into Saturday. This system can become a bigger issue if it gets cut off from the overall flow pattern and is left to meander through slowly. Right now, we don’t think that happens. And moisture will be mostly limited to the southern part of the state for Friday night and Saturday.

Dry to start the extended period, but we do see a significant storm complex coming out of the plains for late the 15th right on through the 17th. This system can bring half to 1.5” rains to 90% of the state, but more importantly, likely will be the catalyst for the dramatic move to much colder air we have been touting for this month. It looks like it will be right on track for the start of November’s second half, unless we see some serious changes going forward. We are starting to see some consensus among other long term models too, which point to the same kind of change coming.

But, for now, we have a good harvest window from tomorrow right on through most of next week, and warmer than normal temps should aid dry down in the wake of rains from last night and this morning!.