Clouds will be hanging around the next few days as an upper level system passes by to the north today, and a stronger storm complex passes by to the south. We will have to watch for a few scattered showers pushing into the extreme southern tier counties of the state today, particularly in southeast Indiana, but we do not expect anything to move farther north. The clouds over the northern part of the state may trigger some spits and sprinkles at times, but in general, we have drier weather pushing in over the state. From today forward. However, an active pattern continues.

Our next system is in for late this weekend, mostly Sunday. Models are having a tough time pinpointing the evolution and track of this system. The European model, which had been the strongest by far, now brings but a whimper in on Sunday, Sunday night and early Monday. But, it brings cold air in faster, so that we may still be looking at some snow. Then, that model brings a second, stronger wave, perhaps still part of the overall large circulation, in for Tuesday, and it could have some heavy liquid totals with it. However, other models are not as keen on the larger rain totals. Time will tell, but we still think that the cold air will be the key to this system, and we could be looking at our first accumulating snows over the northern part of the state as we start off next week. WE also look for total system precipitation to stay in that .25”-1.5” range, but we may have to extend the rain through Tuesday depending on the timing of the arrival of the main circulation. So, stay tuned. Either way, it is going to be an interesting start to next week. The map above shows the advancing first wave Sunday early afternoon. 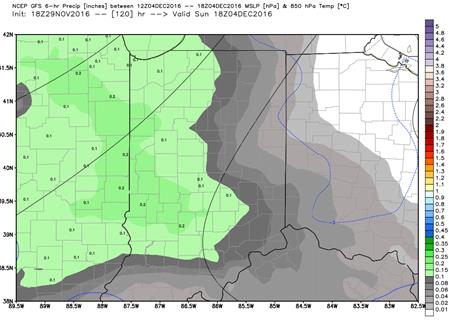 After that, another quick moving wave comes through for overnight Wednesday night into Thursday. That front can bring .25”-.4” moisture and if cold air comes fast enough, rain can end as snow again. Then, gusty winds follow that from the west and northwest, bringing in much colder air to the region.

In the extended period, we have some concern that the system for the 10th may stay south (much like what we are seeing today over the Deep South and TN valley), but the active pattern continues with another sweeping front across the plains and into the state for the 14th into the 15th. Liquid totals can be half to 1 inch. So, with this pattern, look for plentiful moisture through the first half of December, and also increasingly impressive shots of cold air coming down out of Canada, right into our backyard.