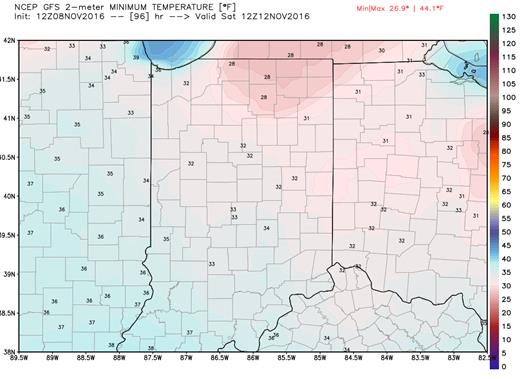 Dry weather is back in over the state starting today, and the dry pattern will hold into next week. Strong high pressure will be in play as we finish the week this week and move though the weekend. Cooler air coming down the front side of the high will keep temps closer to normal here through the end of the week, and the coldest air may settle in Friday night into Saturday morning. In that period, we think we can see some frost over the northern half of the state, with our first run at the actual freezing mark this year! Imagine that: no freezing temps until November 12th!! One of the longer growing seasons we will have seen over the northern part of the state. The map shows minimum temps Saturday morning. Still…this is basically a 1 night deal, with strong south winds coming up the backside of the high as it moves east. That will put temps well above normal again for the weekend and early next week.

Our next system still is on track to move in early next week. However, models are a little less impressed with the system today vs. yesterday. We still like a warm front followed by cold front set up, but may have to pull back on precipitation totals just a bit. Timing looks good with the warm front late Monday into Tuesday and the cold front later Tuesday through midday Wednesday. We will put rain totals at a few hundredths to .4”, but think the biggest change in the system may be in coverage. We are pulling coverage back to 65% for now, but the bigger story may be that the bulk of the areas that see rain will likely be in the lower half to third of the precipitation range. However, the circulation still is strong enough to bring in the much cooler air we have been talking about behind the system for later in the week.

Strong north winds for Wednesday afternoon through Friday will take temps be below normal over the entire state. However, the air mass dries out quickly, so if there is harvest remaining, even though it is going to be cooler, it conditions should still dry down nicely.

In the extended period we have 2 strong fronts now to watch in the 11-16 day forecast window. The first front looks to arrive next weekend, although there is some difference among models as to which day. So, we will watch the 19th and 20th closely. The front looks strong, and will try and sweep through the entire state. Rain totals can be half to 1 inch as projected right now, with coverage at 90%. Then another front shows development potential way out at the end of the forecast period, for Thanksgiving Day. A cold front may work through that brings .1”-.5” rain totals with 75% coverage over the state. But, that front is far out in the extended window, and has the biggest opportunity to modify or even go away…so don’t get too sad about the potential for thanksgiving rains just yet.