Precipitation yesterday turned out to be less of an issue that we had feared. The action moved through relatively quickly, and then, instead of clouds dominating the rest of the day, we actually were able to see sunshine, lower humidity, and strong north winds come in to facilitate fast drying. We likely have to pay the piper for that today, as moisture returns to the state and looks to be a little more encompassing than we were previously looking for. Two-day rain totals will end up being the same, we are just shifting moisture around a bit. So, today, look for scattered showers that bring a few hundredths to half an inch, and we are bumping coverage up to 60% of the state. We should be dry overnight tonight and into the start of tomorrow.

Our next round of better-organized moisture remains on track to arrive Saturday afternoon. Some parts of the state in the far north may even be dealing with some action early Saturday morning, but most of that moisture stays north into Michigan. We have showers and thunderstorms in the afternoon and evening hours from I-70 northward. We expect nothing south of I-70. Rain totals remain at .25”-1”, and we will need the thunderstorms to get closer to the upper end of the range. From Saturday night into Sunday we try to see a bit of drying come in, but at this point in time, we are declining to keep moisture out of Sunday. We think there could be a few spotty, pop up showers over the state Sunday…no more than 10-15% coverage, but enough to make us not want to wave the “all clear” flag just yet. Areas that stay rain free will see a mix of clouds and sun.

We are keeping Monday and Tuesday dry over the state. We should see partly sunny skies for the period, although clouds will be increasing on Tuesday ahead of our next frontal boundary. Models are in some pretty major disagreement on the Sunday-Tuesday period, with the European model more toward our thinking and the American model putting rain chances in every day. This atmosphere looks ripe for clear breaks behind each wave, and that is why we are continuing to trend drier. With strong south flow, we will be priming the atmosphere for a significant frontal boundary passage later in the week. 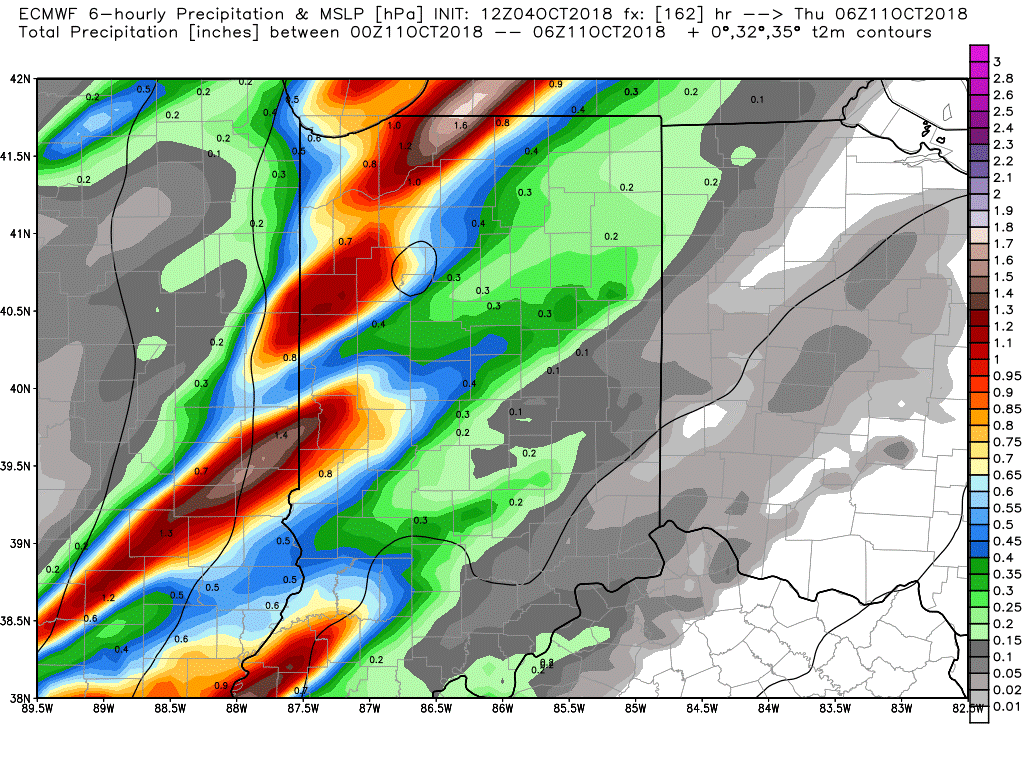 A few scattered showers may work in overnight Tuesday night into early Wednesday, but coverage does not look to be any more than about 40%. Rain totals will be light. But then through next Wednesday, instability mounts as a strong cold front pushes in from the west. Heavy rain and thunderstorm action arrives late afternoon and evening and continues into early Thursday. We are dialing back the duration of this frontal passage and subsequent rain this morning, looking for no more than a 12-24 hour period of precipitation…but it still looks to be a very significant event. We are keeping rain totals at a half to 1.5” right now but may have to revisit those rain expectations on Monday. Some models right now are getting very zealous with rain projections…others are definitely underdone. There will be some potentially impressive rains from this passage, and it will shut down harvest statewide. We expect 100% coverage. The map shows the potential set up around midnight Wednesday night.

Dry from Thursday afternoon on through Friday, Saturday, and Sunday now to finish the 10-day forecast window. Early in the extended period, we have rain for Monday, the 15th. We can see up to half an inch of moisture with 90% coverage. But, then we settle back in with a drier pattern for the balance of our forecast, from the 16th through at least the 20th.

Temperatures will remain normal to above normal through midweek next week. In fact, we still look for temperatures this weekend to be back in the “summerlike” category. With the system at midweek next week, we expect temps to make a leg down and be normal to a bit below normal, and then after the front on the 15th, we likely cool off a bit more.