Sunshine will attempt a glorious return to the Hoosier state today after snows took their own sweet time moving through yesterday. However, don’t let the sun fool you this morning…its rather cold out there. We have seen some temps in the single digits and subzero ranges reported this morning. This likely will be the coldest morning of the week. Although we see a similar set up tomorrow with sky condition, we should see temps slightly better to start the day. We should be dry through the rest of this week, as high pressure moves through .This high will eventually promote west and southwest winds on its backside late Thursday through Friday and Saturday. Temps will move slowly, with Thursday slowly climbing to near normal, and then for Friday and Saturday we should be above normal in most areas. WE expect all of Indiana to be above freezing for highs those days, and there should be a large amount of snow melt over the state. 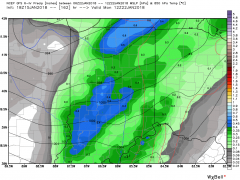 Saturday will feature the strongest southwest winds, and that will create a bit of overrunning precipitation late in the day and into Sunday. This action will be limited to scattered showers giving no more than a few hundredths to a tenth or two, mostly over northern parts of the state and west central Indiana. This is all ahead of a stronger front moving in later Sunday through midday Monday. Rain from that event still look to hit our range of .25”-.75”, and we are keeping coverage at 90%. Here is an updated maps showing a snapshot of action for next Monday.

Our extended forecast is unchanged as well. We see temps cooling just a bit for next Tuesday, but impressive cold air is not likely. Instead, temps stay near normal for most of next week.  South winds are back at midweek, suggesting that another strong system is in the works out in the plains. We can see scattered showers trying to move into southern parts of the state going into next Thursday, the 25th, but think this is just a little bit of warm front overrunning ahead our next strong system. That one shows up as we kick off the 11-16 day period. We have a massive system exiting the 4 corners region late Friday, the 26th, moving east-northeast over the coming 2 days. This system should arrive here closer to the 28th, and will have liquid equivalent precipitation potential of half to 1.5”.  Currently, the track of the heaviest action (the stronger of two lows) is well south of us, crossing the Deep South, but a system like this needs to be watched as it evolves. Behind it we likely see cold arctic high pressure returning for the finish of the month and start of February. The cold air should come in stages…the initial push behind the front for the 29th and 30th, and then a colder shot behind a clipper we think could emerge around the 31st into the 1st.