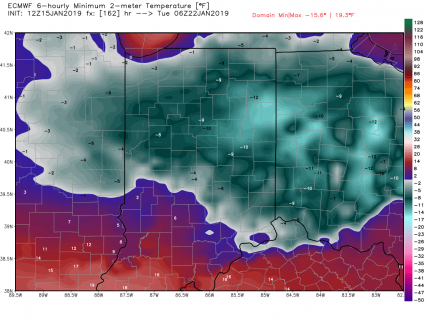 No significant new precipitation today, although clouds will be a big player again. We are turning our focus to the active weather pattern that kicks off tomorrow. Today is somewhat of an afterthought this morning.

Precipitation pushes into the state tomorrow. We are seeing signs of warmer air surging farther northward. This may push the freezing line for Thursday up between US 24 and US 30. We still like rain in the southern half of the state for the most part, but may see more of a rain and snow mix from I-70 to US 24, and there can be some ice in there too. A coating to 2 inches of snow is still possible in the northern part of the state, but will not be as wide spread. Liquid equivalent precipitation totals remain in a range from a few hundredths to .4”, with coverage at 80% of the state for tomorrow. We take a bit of a break with dry weather for Friday.

No change in thoughts about a strong winter storm hammering the state this weekend. However, late yesterday we saw models start to shift the track of the low farther north, and push the area of heaviest snow a bit farther north too. Models also increase snow potential. We are going to leave our numbers at 4”-10” again this morning, just to keep consistency and to not chase model runs. However, if we get another round of data that points toward these kinds of snow totals, look for an increase in our snow totals for this storm in tomorrow’s forecast. There is still plenty of time for things to change, but in a storm that we have said from day 1 would be very “track dependent”, it appears that the track is shifting farther north. Central and northern Indiana need to be on the lookout for significant snows, and southern Indiana could end up with a big bunch of rain and even some ice. Tweaks to the forecast, if they are coming, will be made tomorrow morning. We are also seeing some markers that lead to this system taking longer to exit, so accumulating snow may continue through parts of Sunday as well. After dealing with the snow, the insult will come next, as brutal cold air blasts in behind the system for later Sunday through the first half of next week. Temps will be well below normal, and we should see at least 1 below zero night, and plenty of hours with temps in single digit territory. The map at right shows low temps overnight Monday night. We expect nothing but some lake effect snow for the first part of next week in northern Indiana.

Our next system is at midweek next week. We still feel there will be plenty of cold air around to trigger snow out of that event, and we will keep totals at 2-6” statewide. However, just like the weekend system, data is starting to suggest that the midweek storm next week can be stronger, and last longer, developing into a major event. However, there is also a good push of south flow with the arrival of the system that may impact precipitation type. At this point, we think liquid equivalent will be over half an inch in many places, but we have concern about 1-inch liquid potential feeding the system. We will update that one too tomorrow morning, as we think the strength of action this weekend will directly correlate to how next week’s event develops.

We remain cold through the remainder of next week. We are keeping the extended period forecast fully the same this morning. A reinforcing shot of cold air is on the way for the extended window. This should keep an active snow pattern in place. We still look for snows for the 26th and 27th with minor accumulations, and then a strong storm at the end of the month on the 30th brings potential for 3-6”.