High pressure moves off to the east through this afternoon, and that should start to usher in some moderating temperatures. Yesterday was likely the coldest day of the week and today will be a close second. But, tomorrow west winds ramp up and that should start to bring gradual improvement in our temperatures, although if the winds are as strong as we think (12-25 mph) wind chills will take some of the shine off the moderation. There will be a bit of lake effect snow trying to hang on through the day today in Laporte and west/northwest St Joe counties, but all other parts of the state should see sun…better sun chances than yesterday 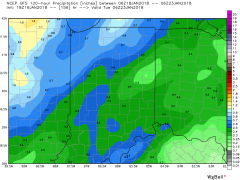 West winds tomorrow take temps closer to normal, but strong southwest winds Friday will finally push fully normal to above normal temperatures in over the entire state. We expect highs to approach and exceed freezing on Friday. With the full on southwest winds, Saturday will likely be the warmest day of the next several, with temps a good 10-20 degrees above normal. Still, we should fall short of last week’s mild push. Sunday would have the potential to be just as warm as Saturday, if it were not for the clouds that we expect to fill on over the state.

Our next system is delayed some this morning. We still expect plenty of clouds over the state for Sunday with scattered, hit and miss light rains. Moisture totals will be a few hundredths to a tenth or two maximum. The best rains will be seen over the norther half of the state, but we are not going to rule anyone out at this point. Coverage of these light spits and sprinkles will end up being around 60% of the state. Still, we think heavier rains will hold off until later Monday.

The cold front arrives here Monday with rains kicking off ahead of it Monday morning. The rains go through the entire day, and our rain totals are unchanged at .25”-.75” over 80% of the state. Along with the rains, we expect strong south winds averaging 15-30 mph as the front crosses Indiana. Our forecast this morning has a full 12 hour delay in rain arrival from our previous forecast yesterday. The map above shows potential storm total rains for the Saturday-Monday period.

The rest of next week sees colder air push in. However, a major cold air blast is not likely. We think the cold air will be good enough to trigger some light snows over the state (wet snow, but still more snow than rain) Tuesday. This will mostly be north of I-70. A stronger and better organized wave arrives Thursday, and likely will trigger all, or mostly snow. Liquid equivalent precipitation of a .1”-.5” falls over 80% of the state, and we expect temps at or below freezing form US 50 northward, meaning that could yield a coating to several inches of snow. Stay tuned as we get closer to this event, we will zero in on the snow potential and best location.

Behind that frontal boundary, we still have a strong system on the way for the 28th as we start off the 11-16 day forecast period. This front has rain potential of half to 1.5” and coverage at 80% of the state. The timing of the cold air is still up for some debate, so at this time we have to leave our forecast to include rain, snow and a mix of the two. However, we do have colder air returning behind that system, and it will be cold enough to make our next system, one for the turn of the month on February 1, come as snow, and it looks to have excellent coverage with at least a half an inch of liquid to worth with.