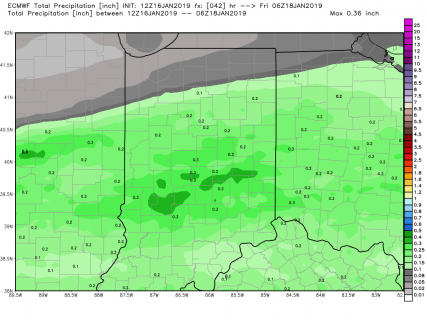 A relatively weak disturbance crosses the state today, but it still carries enough moisture to just be a nuisance. We expect mostly rain in southern Indiana, south of i-70, and we are keeping our forecast of a coating to 2 inches of snow in the northern third of the state, from US 24 northward. That leaves a band in the middle that can see a mix of rain and snow, and potentially some ice through the day today. We think there can be a coating to an inch or two there as well, but that rain will cut the overall snow potential today. In any case, liquid equivalent precipitation totals will be limited to .3” or less, so nothing will too troublesome, and we think ice will be very limited. The map at right shows today’s action, in terms of liquid equivalent. The northern half of this comes as either part or all snow. We will be dry tomorrow.

After seeing models really play up big precipitation 36 hours ago, data has not come in to support any ramping up of our snow forecast for Saturday. We are staying put with our thoughts this morning, keeping our outlook at 4”-10” over about 70% of the state. The heaviest snows will come across central Indiana, ending up in east central parts of the state, stretching into west central Ohio. There still is potential for higher snow totals, and we think models are not done flip-flopping around on this. However, we think that the over-the-top “snowmageddon” forecasts have been seriously overdone, and we remain solidly in the camp that this will be a significant event, but not a world changer. Timing is still squarely on Saturday, with lingering action leaving the state Sunday by afternoon. Significantly colder air blasts in behind the system, and likely is the story for the first part of next week.

While we do not expect any new precipitation from any front or system for the first part of next week, the strong, bitterly cold north winds coming down the fetch of lake Michigan will bring lake effect snows to a large part of NW Indiana, and lake enhanced clouds to a big chunk of the rest of northern Indiana at least on Monday, and perhaps lingering into Tuesday. Overnight lows will be well below zero over the northern half of the state as this cold air races in. This will be some of the coldest air in a long time, and will mark our first significant foray into well below normal temps in 2019.

Midweek next week just continues to look more and more interesting. We have an impressive system coming out of the plains and western corn belt, arriving here next Wednesday, and staying through Thursday. Liquid with this system is well over an inch in parts of the eastern corn belt. But there is strong south flow with it too, so we are introducing the potential for all three types of precipitation Wednesday and Thursday of next week…heavy rain, snow, and potentially freezing rain/ice. IF this turns out to be a warm frontal “overrunning” type event, that would bolster threats of ice here.  Up north, we still have potential for 2-6 inches of snow, and there could be rains from half to 1” in far southern Indiana. Central Indiana is where the question marks are at this morning, and for right now we tend to lean more toward rain based on temperature expectations. However, the cold air may not be pushed out quite so easily.

The extended period forecast remains active. Watch for scattered snow shows for 26th and 27th with minor accumulations, a weak clipper for the 28th, and then a strong storm at the end of the month on the 30th which still shows potential for 3-6”.