West winds today allow for temps to start to climb a bit higher. These winds are not ushering in markedly warmer air, but rather are not bringing in the cold air from the NW…that allows us to see a net gain in degrees here. Southwest winds will be in for tomorrow on through the weekend, and that is where we see the big time warming statewide. We should see fully normal to above normal temperatures in over the entire state Friday and Saturday, with 50s likely in most areas for Saturday and perhaps Sunday. We still expect Saturday to be the warmest day of the next several with Sunday a close second. We just feel that better sunshine potential Saturday will give it the edge. 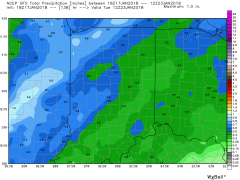 Plenty of clouds blanket the state for Sunday with scattered, hit and miss light rains. Moisture totals will be a few hundredths to a tenth or two maximum with coverage of these light spits and sprinkles at 60% of the state. Heavier rains will hold off until later Monday as our coming cold front arrives. More frequent rains start after sunrise Monday morning, and go through the entire day. Rain totals are pegged at .25”-.75” over 80% of the state, unchanged from yesterday’s forecast. Along with the rains, we expect strong south winds averaging 15-30 mph as the front crosses Indiana. The map above is an updated look at potential storm total rains for the Sunday-Monday period.

Colder air comes in behind the front and we can see some lake effect snows linger in far northern Indiana through Tuesday, particularly Tuesday morning. This will be limited to usual suspect areas, and will not have coverage of any more than 10% of the state. Nothing gets south of US 30, and most of the state sees a dry day Tuesday with clouds giving way to late day sun. Still, the cool air will take temps back to normal and slightly below normal levels, and a major cold air blast is not likely. We are dry in all areas Wednesday and Thursday, with clouds increasing Friday.

A strong front is making an appearance right at the end of the 10 day window now. We think this is the first wave of a strong storm complex we have been talking about for the period in and around the 28th. So, we look for rain and thunderstorms to shoot up into the state next Saturday, the 27th, with some .25”-1” rain totals. Temps look warm enough to have most of this precipitation come as liquid. Then, a second wave may look to arrive on the 28th at the start of the 11-16 day forecast period. That second wave could be worth half to 1 inch of liquid equivalent precipitation, but cold air is marching in too, so we are leaving the door open to some snow from the second part of the system. This is especially true if the even lingers into the 29th…that could lead to some significant snow. The rest of the extended period features a clipper near the turn of the month, around the 1st, with some quick hit snow and cold air, and then a cold Canadian high to start off February. So, the pendulum swings wildly on temperatures through the next week or so, but eventually goes to the cold side and stays there a bit longer going into February.