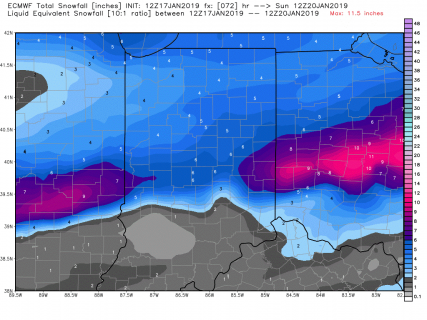 Not much going on today. But we this is the last forecast before our winter storm arrives tomorrow. We are tweaking the upper end of our range just a smidge this morning, but basically are locked and loaded, ready to go. We expect 4-8 inches over about 70% of the state. The heaviest snow will be in central Indiana, likely from SR 26 down to near I-70. Farther south, we see precipitation, but it comes mostly as rain, and ends as snow. Liquid potential in southern Indiana could be up to .75” before we end as sloppy wet snowflakes. There will be some wind with this event, but the best winds develop as the cold air starts to really arrive, coming NNE at 10-20 mph. That will be enough to trigger some blowing and drifting. Winter storm watches have been issued for some parts of the state, and others may be forthcoming. So, while this is nothing like the 20 inch forecasts that were being hurled around earlier this week, it is a significant event, and will be tough to get away from. With the low digging south, the worst snows from the entire event will end up in central and southeast Ohio, where they could see over a foot in spots. The map above shows potential snow for tomorrow’s event through Sunday morning.

Behind this system, we see a very strong polar outbreak. Cold air blasts into the state on Sunday. We can see some leftover flurries pushing east as a result of the dramatically colder airmass. Temperatures will fall to anywhere from -10 to -18 over the northern half of the state overnight Sunday night and Monday morning, while southern Indiana will be in the single digits above zero. Monday will stay cold with single digit highs in many areas. Strong north winds will bring lake effect snows to NW Indiana Sunday and especially Monday, with lake enhanced cloud cover extending farther south and east.

A major disturbance returns at midweek next week. However, we expect strong south wind flow ahead of it, moderating temps quickly next Tuesday. Overnight Tuesday into Wednesday rain and snow spread over the state, and then late Wednesday as cold air returns, snow take over more of the region. There will be plenty of liquid with this system. From US 24 southward, we can see liquid up to 1”, and north of US 24, snows of 2-6 inches are possible. We also continue to have some concern about ice…but need to get closer to the event and see what kind of atmospheric profile we have to deal with before getting to worried about ice. This system is looking to leave quicker, and we should be dry for next Thursday.

The rest of the 10 day window actually looks better, with no new significant precipitation expected to finish the week and next weekend. Temps are trying to stay closer to normal, which would take concern about clipper systems away for now. The extended period still looks cold, and we won’t rule out a stronger system around the 30th and 31st, but we will take a closer look at that next week.