Keep the umbrella with you today as rains will be with us through at least sunset. A cold front coming out of the western belt will bring .25”-.5”spots of rain to 80% of the state. The second wave of action comes in over the northern third to half of the state after sunset through midnight and may be able to trigger an addi9tional .25” of rains there. Strong northwest winds will develop after midnight and will start to bring colder air back in. Any lingering moisture in this period will change over to some sloppy wet snow. That light snow can continue off and on through the day tomorrow over the northern third of the state. Minor snow accumulations can’t be ruled out, mostly from US 30 northward, and some lake enhancement will be seen in far northern Indiana. All told, we need to keep an eye out for a coating to an inch or so of wet snow sticking in northern Indiana, but south of US 24, we expect nothing but clouds and a colder feel. We won’t rule out a sprinkle or flurry, but we should not see anything of major consequence. The map above shows total precipitation (liquid equivalent) through tomorrow morning. 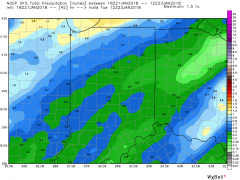 Cold air continues to funnel in at midweek, with most of the state struggling to get above freezing for Wednesday. We do not expect any precipitation with the cold air, and it really will not be nearly as cold as air masses behind our most recent frontal passages. Still, a return to slightly below normal air will be noticeable, given the mild push of the past few days. Winds return to the southwest on Thursday, and we should see another milder surge of air to finish the week. Temperatures begin to climb some on Thursday, but generally stay near to slightly above normal. We see Friday warmer with sunshine and above normal temps. Strong winds at 15-30 mph will mean we still feel a pretty good chill, though, even though actual air temps may run toward the lower to middle 40s again. This surge and the strong wind set up will be in advance of our next system, which still looks strong.

Even though we expect a strong system to move in from late next Friday right on through the weekend, it looks this morning like it is weaker, and has less moisture available than what we were seeing when we finished out last week on Friday. The rains should not drag out as long, and total, overall precipitation, in terms of its moisture equivalent looks better than it had. Scattered light showers develop over western Indiana overnight Friday night, and may just initially start as a bit of fog and drizzle. Then rains move across the state Saturday, bringing rain totals of .25”-1” with 90% coverage. However, the upper end of the range (half to 1” rain totals) looks to be limited to areas south of I-70. Moving into Sunday, cold air starts to advance in on the backside of the front into NW and northern Indiana. There is not a lot of moisture still hanging around at that time, so snow is not expected, at least right away Sunday morning. Through Sunday midday and aft4ernoon we won’t rule out some light snow developing, but at this time, we are backing away from concern over serious accumulation. Strong NW winds will make for a cold finish to the weekend.

Some lake effect snows may develop next Monday (29th) over north central and northeast Indiana, with minor accumulation possible. However, the rest of the state should see clouds give way to sun, and the strong NW winds will keep temperatures sub-freezing statewide. Cold air holds through next Tuesday.

We finish the 10 day period with the wind shifting back to the SW for midweek next week, which will allow temps to moderate some for Wednesday, the 31st. We do not expect a big move above normal, but a return to normal for Wednesday is likely. A clipper races through next Thursday, and brings a quick burst of snow, along with colder air.

The extended period brings another strong system up from the SW out of the central plains for the 3rd and early the 4th. This system has liquid precipitation potential up to 1.25” and coverage at 100% of the region. This system may have some rain to start, but its current projected track would signal that we need to be on the lookout for some significant snow as well. Time will tell. Behind that event, we put together several dry days but could see another strong system for the 6th into the 7th, bringing the potential for snow. This would be the start of a potentially very active month of February