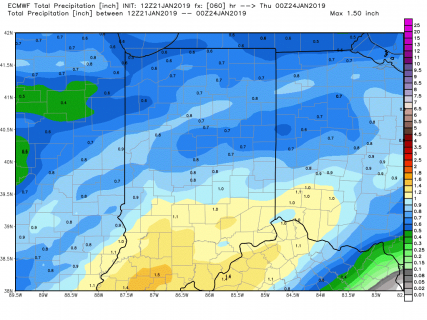 No significant changes in our outlook for the short term this morning. Strong south flow develops today and that should allow for some good warming. We expect temps to actually be normal to above normal today, and start off tomorrow the same way before falling apart. That means we are looking for mid 30s in northern Indiana, and 40s south. Our next system arrives tonight

Rain begins mostly after sunset tonight and continues into tomorrow. Action ends tomorrow midday to early afternoon in the north, but holds on until evening in the south. Rain can end as a spat of light, wet snow, but the best chances of that will be in east central and southern Indiana late tomorrow afternoon and evening. We are expecting .5”- 1.3” of rain, and then a coating to an inch of snow before everything ends by the end of the day tomorrow, and the best chance at the 1” of snow comes in the south. The map at right shows total liquid equivalent potential for the event through the end of tomorrow. We think the SW Indiana numbers on this representation are too high…but it conveys the right idea: there will be plentiful moisture over the state through the next 48 hours. Much colder air blasts into the state for Thursday and we can’t rule out lake effect snow in northern and northwestern areas for Thursday, although accumulations will be limited mostly to areas very closer to the lake. Partly sunny skies will be found in other locations.  Winds will be strong out of the north and northwest. Temps continue to ratchet down on Friday, yielding the potential for some morning lake effect snow in the north, but we should be at least partly sunny over the rest of the state.

A couple of quick hit “clipper”-like systems will track across the state through the weekend. One Friday night into Saturday will bring a coating to an inch to the northern half of the state, and one Sunday afternoon and evening will bring similar totals to the state from US 24 northward. Coverage from these will be at 60%…there is not a lot of moisture to work with there, but it does not take much to produce clouds and snow. Monday is dry.

A well-organized front moves in for next Tuesday (the 29th) bringing at least 1”-3” snow potential to 80% of the state. Then another round of bitter cold air takes the state for Wednesday and Thursday as we finish out January, and that likely squeezes out a few flurries in that period, even with no good moisture source.

For the extended period, we still are seeing some models try and bring an exceptional warm up for the 2nd and 3rd, while others do not. We will stay the course this morning, looking for A dry start to February next Friday the first, and then look for a chance of rain or snow for the 2nd and 3rd. The storm looks more intense, with moisture equivalent precipitation of half to 2” …but what will the temperature be? Honestly, with that much liquid available, we better pray for rain…because that snow event would be massive. Still, we have cold air in for the 4th, bringing lake effect snow back to the region, and then another batch of snow, potentially significant, for the night of the 5th through the 6th. The extended period looks very active, but where will the cold air set up?