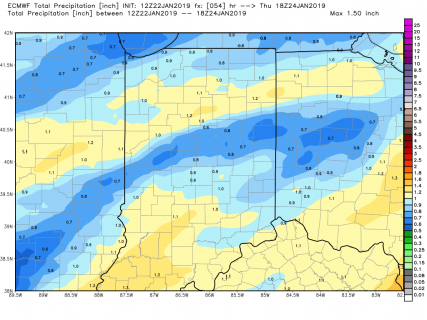 Rain continues this morning as temps were steady to rising overnight. We should see northern Indiana in the upper 30s to near 40 for highs today, while southern Indiana will be at least in the upper 40s, if not higher. This will quickly come to an end, though, as a cold front is marching steadily toward us. In fact, we likely reach those highs this morning and then temps fall through the afternoon. There is a chance that rain ends as sloppy wet snow. There can be a coating to an inch of accumulation, with the best chances in eastern and southern parts of the state toward evening. Rain totals from this event remain at .5”- 1.3”, including what fell back into yesterday.  A map of storm total precip (liquid equivalent) is above.

We turn much colder air for the rest of the week. We can’t rule out some lake effect snow in northern areas tomorrow, but the threat looks smaller than our previous forecast. Friday, we keep strong north winds around, but only minor chances for morning lake snows. The rest of the state will see at least partly sunny skies both days.

Two quick hit “clipper” systems move through the state and the eastern corn belt this weekend. The first comes overnight Friday night through Saturday early afternoon and will have the potential for a coating to an inch over about 60% of the state, skewed north. A second wave on Sunday brings similar totals to the northern half to third of the state. There can be a bit of wind, but we really don’t think either event is anything to get too excited over.

Our next front is still on the way for early next week, although it may come in just a bit sooner, late Monday into Tuesday. This front still has the potential to bring at least 1”-3” snow potential to 70% of the state. Then another round of bitter cold air takes the state for Wednesday and Thursday as we finish out January, and that likely squeezes out a few flurries in that period, even with no good moisture source. We are leaving the rest of the forecast unchanged through early February

For the extended period, we have a chance of rain or snow for the 2nd and 3rd. Available liquid with the system still looks impressive, but perhaps not quite to yesterday’s levels, with half to 1.5” possible. Still, with that much liquid available, we better pray for rain…because if all snow, it would pack quite a punch. Another round of Canadian air rushes in for the 4th, bringing lake effect snow back to the region, and then another front can produce snow, potentially significant, for the night of the 5th through the 6th.