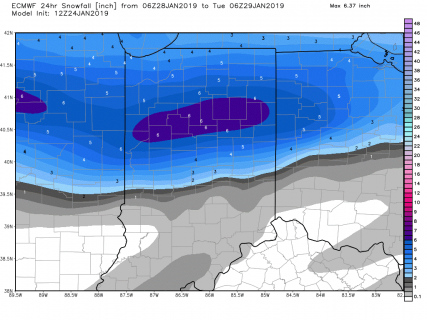 Cold air continues to blast the state today, and it will be tough for a large part of the state to get out of the single digits and low teens. Overnight lows last night were below zero in some areas. Polar air will work through the state right on through the weekend, although today likely is the coldest day out of the next several.

Lake effect snow developed last night in northern Indiana, and we expect light snow to hang around through the weekend with two little waves of action coming through. Light snow from late tonight through tomorrow can bring a coating to an inch of snow to the northern half of the state, and then another little wave brings scattered snow showers for tomorrow night through Sunday. That batch also has the potential of a coating to an inch, but we think most locations will be closer to the “coating” end of things. Sunday snows will have a coverage of 70% of the state combined.

Our next big system is coming a little faster now for next week. WE should end up with snow moving it to northern Indiana Monday morning, and the action continues through midday Tuesday. Central Indiana may see a little rain first and then snow, while the southern third of the state may end up with little to no action. Snow totals remain at 2”-8”, with the upper end of the range from I-70 northward We can see a few tenths of rain too in central Indiana. While the well-organized action moves away by midday Tuesday, lake effect fills in over northern Indiana for the balance of Tuesday. The map at right shows preliminary thinking for the Monday-Tuesday event…but this is still early. Our final updated numbers come the next time we chat with you, on Monday morning.

Very cold air follows that system in for the rest of the week next week. We expect a mix of clouds and sun and bitter cold temps from Wednesday through Saturday. We will be well below normal and below zero multiple times during that period. Another frontal system arrives for Sunday the 3rd, bringing a chance of snow and perhaps a bit of rain again. Accumulations look likely at this time.

For the extended period, temps see a brief period of moderation around the 5th, ahead of a system arriving late the 5th and lingering through the 6th. That event has rain changing to snow, yielding some accumulation. Liquid equivalent precipitation will be from .25”-.75” with 80% coverage, but it is too early to try and tackle the breakdown of rain vs. snow. We are back to cold air for the 7th, and then potentially warmer temps from the 8th forward. However, those “warmer” temps will only be back close to normal, not above.