So, finally, we get to the end of the week and we get to our warmest days of the week. Temps will be above normal statewide today, and we should do it with sunshine in many areas. However, we also have to deal with some strong southwest winds, averaging at least 12-25 mph, and likely higher. These winds will be bringing the warmer air in. Tomorrow’s temps will be similar to today’s, but with rain advancing tomorrow and lots of cloud cover, we really think the best feeling day and the warmest day will be today. 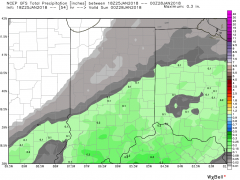 Rains start tomorrow, in some cases early morning, but will reach their zenith from midday through the afternoon. Rains will be light in most cases, and we are shaving a little more off of our rain totals for the event. We are projecting a few hundredths to .4” maximum over about 70% of the state. Coverage actually looks a little better than 24 hours ago, and by that we mean there is less of a chance of all of northern Indiana missing out on the rains. At least scattered showers will be seen in many areas. Still, this is not a dramatic event by any means. Moisture is done by shortly after sunset. The map shows rain totals through Saturday evening.

Drier, cooler air is in for Sunday as high pressure moves in. However, this is not a bitterly cold arctic air mass, just a typical cool push behind a weak system. There may be enough cold air to trigger some minor lake effect snows over far northern Indiana on Monday, but even those chances are not all that great, and definitely smaller than our concern a few days ago. We will keep scattered light snow and flurry action well north of US 30, and more likely limit it to the South Bend and Laporte areas. Cold air will be in play for both Sunday and Monday, with temps slightly below normal.

Tuesday of next week we see winds switching back to the southwest, signaling yet another moderating push of temperatures to above normal levels. The winds will be rather strong on Wednesday, the 31st. This hints at another strong front wanting to arrive shortly thereafter. We have rains starting to move into northern Indiana around sunrise Thursday morning, and then precipitation slowly works across the state. Action starts as rain, but we still expect cold air to catch the moisture, and switch rain over to snow. Liquid equivalent precipitation could range anywhere from .25”-.75” as things stand right now, and we are keeping an eye on a solution that may have rain ending as several inches of snow over the majority of the state later Thursday afternoon and Thursday night. It all comes down to where the cold air wants to set up and how fast it wants to race in behind the cold front. We will have a significant update on this system Monday morning.

The week finishes with a dry Friday, but temps are cold, with most of the state below freezing. High pressure sets up over eastern Indiana next Friday afternoon. We keep cold air into Saturday, but south winds return on Sunday. This time, though, we do not expect a significant warm up, as a cold front organizes quickly to the northwest, and brings colder flow in by Sunday afternoon. This leads to some moisture over central and southern parts of the state for Monday the 5th, although we can’t quite call it a clipper system anymore. Canadian high pressure dominates most of the rest of the 11-16 day period, with another system coming out of the central plains into our area late the 8th through the 9th. That system can bring the potential for big snows again.