Today looks very similar to the past two days. We find ourselves dealing with lake effect snow and clouds over northern areas today, and this may even linger into tomorrow. Strong northwest winds are fueling the lake snow potential there, while the rest of the state just sees a mix of clouds and sun. Those strong winds are also producing low wind chills this morning as yet another wave of bitter cold air has settled in. We saw a wind chill advisory go into effect last night, and it holds through the first half of today. Temperatures will struggle to work through the teens today. Tomorrow we should see temps start to work a little higher, and full south flow will bring temps up to near normal levels for Sunday ahead of our next system. 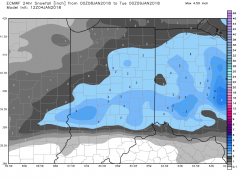 We have no changes to the outlook of that system, short of knocking its arrival time back just a bit this morning. We look for the precipitation from our next storm complex waits to develop in west central and southwest Indiana near or just after sunset Sunday evening. Precipitation then continues through the overnight, and through the first half Monday. The track still suggests predominantly snow here, but we may have to keep an eye out for some rain mixing in south of US 50. Temps likely will not get warm enough overnight Sunday night or early Monday morning to see any full rain. This would be different if the system waited until the daylight hours to pass. But, its timing is just not right. Our official snow totals are as follows: 1-3” with nearly 100% coverage in Indiana. The south and east track (vs what we saw early in the week) has positioned the best snow from this event over south central and southeast Ohio, so we miss out on that. All in all, moisture availability has fallen off, and we seem to have dodged a significant bullet here this time around.

Drier, colder Arctic high pressure comes in behind the front for Monday night through Thursday. We continue to look for temps to drop to below normal levels for that period. However, we do have some changes for later next week. Our next front has changed its orientation somewhat, and we think we can see strong south winds develop late Thursday afternoon into Friday that will take temperatures up in a hurry. We could see some significant snow melt going in to Friday. The front will also bring another round of precipitation, with liquid equivalent totals of .25”-.5” from Friday into early Saturday. While we expect some rain to try and mix in, particularly south of I-70, we think mostly snow will be seen north. This could be another 1-3 inch event north, and just a sloppy mess down south.  Precipitation coverage will be around 90% of the state, with snows at 50% coverage.

The extended 11-16 day forecast window has knocked out next front back to the 15th, but it still does not have much moisture with it…only a few hundredths to a tenth or two, so we do not expect anything more than minor snow accumulations. Farther in the period, though, around the 18th, we have another strong front sweeping in from the NW. That front has liquid equivalent precipitation up to.75” with excellent coverage over the state. Temperatures will be the key to the forecast though. Each of these systems over the next 2 weeks have strong south flow with them, and temps that may be able to slowly work higher. So, these extended systems, especially ones with good moisture content, have a chance of bringing better rain potential to the area instead of snow. Temperatures will be what we look closely at as this forecast pattern evolves.