Well, we are embarking on quite the roller coaster ride this morning as we look at the weather for the next week to 2 weeks.  A front brought precipitation into western and southwestern IN last evening, and we have seen it spread across the state. It’s been a mixed bag to this point with a lot of snow, but a better surge in warm air has led to rain mixing in or dominating in the far south. While precipitation should pretty much be done by midday, we will lower our snow totals for this event to a coating to 2 inches over about 50% of the state, and look for more liquid this morning in the south. The warmer air pushing in over the south is a harbinger of what is to come. 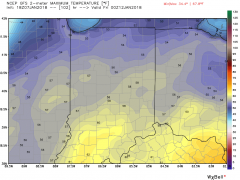 We are projecting milder air in over the state for tomorrow, Wednesday and Thursday, as the arctic high we thought would be able to graze us actually gets bottled up farther north into Canada. I don’t think we will hear a lot of complaining over that. Now, temps will be warmer off to our west in IL, where they benefit form stronger south winds, especially Wednesday and Thursday. Still, here we can see a lot of snow melt. The southern part of the state will be snow free up to at least I-70 by Thursday midday. The map above shows high temperature potential for Thursday, as projected by the GFS model. But, as the warmer air comes in, keep in mind we have a very cold ground surface, so we will be seeing potential for a lot of fog, low level cloudiness temps that may fall short of what others are talking about, and our biggest concern over this will be over the northern third of the state. We call this the “refrigerator effect”…where the snow pack and general frozen surface creates a pocket of cold air near the surface that take 5 degrees or so off any moderating push. Just something to watch for.

Rains move into Indiana late Thursday afternoon and evening into Friday, and then cold air comes rushing back in. That will change the rain to snow, and we could see some significant snow accumulations from Friday afternoon on through Saturday midday. The worst snows may end developing right over us here in Indiana, if the track of the low stays as currently projected (MO boot heel to Cincinnati to Kitchner, ON). In fact, right now, we have to call for snows to actually continue on through Sunday, as strong, north winds and massive wrap around moisture come in on the backside of the system. But, we expect this track will move some over the coming days. Either way, we see cold air blasting back into the Hoosier state behind the system, and that cold air then stays through the balance of the weekend and the start of next week, including another foray into subzero temperatures.

By midweek, we try and moderate again, as strong SW winds are back, likely ahead of our next weather system. This will allow for another brief thaw. But, we look for scattered rain showers changing to snow late next week for Friday into Saturday, followed by cold air through the 21st. The end of the extended 11-16 day window suggests another strong front, with a low coming out of the central plains and moving off to the northeast. This could bring another round of rains followed by significant snow and arctic air around the 22nd and 23rd. So…buckle up – it’s going to be quite a wild ride, we think.