No change in the near-term forecast through the rest of this week, but this morning we are keeping an eye on a couple of new wrinkles for the weekend, and next week. These wrinkles are hinting at some better precipitation chances and totals, but we are not changing our forecast just yet. As always, we are looking for a couple more data points to confirm the need to change, so stay tuned.

Today looks very similar to yesterday, meaning we are dry in nearly every part of the state. There may be some heat-based instability and cloud cover in central-southern Indiana that can trigger a very isolated shower, but it is not enough to really be concerned about at all…just pay attention in those areas this afternoon. Dry weather holds tomorrow through Friday, and temps remain warm. Highs today through Friday to be in the upper 80s to very low 90s statewide, which is generally 2-5 degrees above normal. Humidity values will stay low today and tomorrow but may start to build later this week. The map below shows rain potential through Friday.

For the weekend, we are keeping our forecast dry. But, this is where wrinkle number 1 comes in. We have a disturbance moving over the great lakes for the weekend. Some models are trying to sweep a little moisture out of this system farther south into northern Indiana through the day Saturday. It’s not so much that the track is changing, but more that these models are trying to project a less compact circulation. If moisture were to develop, it would likely stay north of SR 28, meaning at least 2/3 of the state sees nothing anyway. We are not putting more moisture in our forecast at this time, but this will be a feature we look closely at the next two days. Sunday is dry, but humid in our forecast, and that pattern holds into Monday. 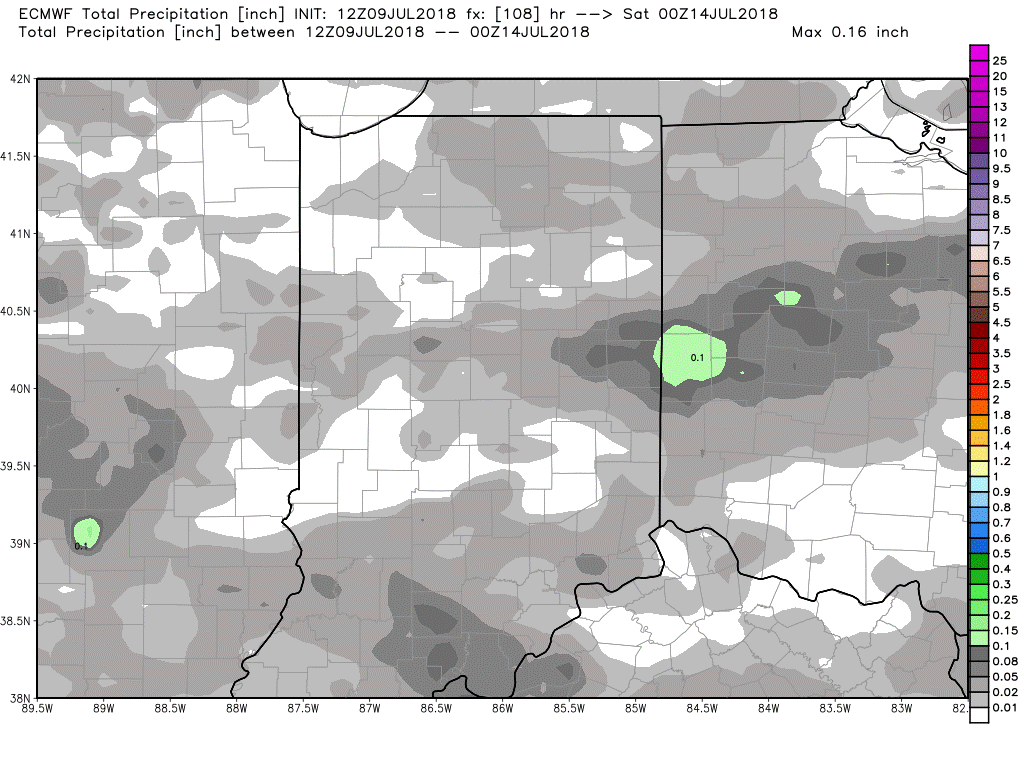 Our next threat of moisture is still on track to develop Monday evening into early Tuesday. Moisture is not impressive initially, a few hundredths to a quarter inch tops, with coverage 60% of the state. The action looks to hold through the day Tuesday, where we can see an additional half inch or so. Then, we encounter wrinkle number 2. Models are suggesting we see another surge of moisture and energy Wednesday that lasts into Thursday. This surge would not only bring more rain but could ultimately lead to a strong thunderstorm outbreak statewide. While this is at the end of the 10-day window, it would make sense, given the building of warm air over the region up to that point. IF our cold front strengthens, thunderstorms would be a potential offshoot. Much like our discussion of wrinkle number one, we are not changing the forecast right now, but giving a heads up as to some potential future moves, if data starts to swing toward this solution. For now, we have rain leaving Wednesday by mid-morning, and sunshine back for Thursday. But, we will update you tomorrow morning.

In the 11-16 day window, we move on with more of a basically dry forecast pattern. Strong surface high pressure settles in over the eastern corn belt and controls the flow through at least the 22nd. There is a front looking to sag into the state around the 23rd and 24th, near the end of the extended period. As we alluded to yesterday, if that front holds together, it has potential to bring half to 1” of rain. But, confidence remains low at this point.