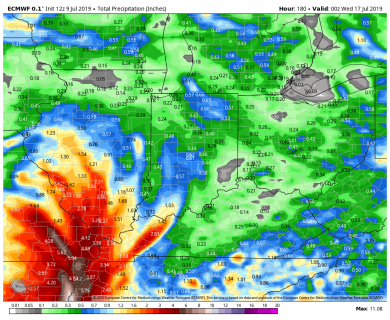 A little bit of moisture on track to move through the state today into tomorrow morning. Action will be light as it starts in northern Indiana this afternoon but will increase some in its intensity overnight tonight and tomorrow morning. We are keeping rain totals at .2”-.7” with 60% coverage.

We turn out partly sunny by tomorrow afternoon as the moisture moves away. We stay sunny into the weekend through Saturday statewide. On Sunday, most of the state continues to be mostly sunny, but there remains a few scattered showers developing over areas from US 30 northward through the day. The rest of the state stays partly to mostly sunny.

We are making our early week outlook drier, keeping partly to mostly sunny skies on in for both Monday and Tuesday now. However, those drier changes are tied to uncertainty about the tropical event still trying to unfold over the western Gulf. The remains of “Barry” can make life interesting from Wednesday forward. Models still are wildly divergent. The Euro take the remains right up the Mississippi valley and into the corn belt. Others have the system spinning apart farther south, keeping rains well south of the Ohio River. IF the rains stay south, we likely see nothing until a front tries to nose in later in the week. IF the system does make it that far north, the result would be slow moving rain for the entire state Wednesday through at least Friday. So, a lot rides on the track of that tropical event. Our leanings are for more of a southern track for now…but the Euro has been very persistent in taking moisture into the corn belt. So, we will continue to track.  The map above shows precipitation through next Tuesday…before the arrival or non-arrival of any tropical remains.

Tropical system or not, we do expect showers and thunderstorms next Friday, the 19th into the 20th. But then the rest of the extended window is partly to mostly sunny and dry.