Nothing different this morning to our forecast the rest of the week. It is warm, and it is dry. Yesterday’s pop up shower action was nearly as expected but did drift a bit farther north in eastern Indiana. Still, there is no threat of even any pop-up moisture today through Friday. Sunshine will dominate.

This weekend we are zeroing in on that moisture that looks like it wants to drift in from the north, as an offshoot of the Great Lakes disturbance. We are going to insert scattered showers in our Saturday forecast for areas from US 30 northward but will keep the state dry south of US 30. The northern rains will be no more than a few hundredths to a quarter inch, and will not last long. However, we can see them try and pop up at any time through the morning and afternoon. There likely is nothing at night. 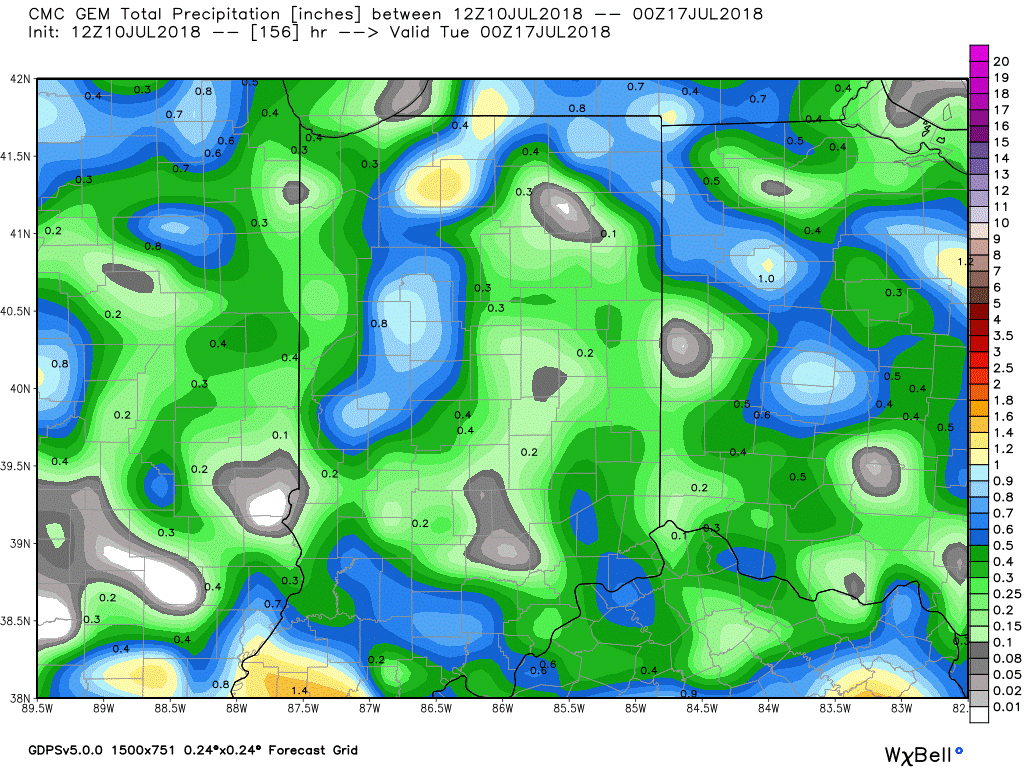 We are speeding out next system up just a bit as well. That means on Sunday, we can see another chance of scattered showers from US 30 northward in the morning and midday, but nothing really south of a line from Michigan City to Decatur. Then Sunday night begins a spread of scattered showers across the rest of the state, and those showers give 50% coverage through Monday morning, and by the time we get to Monday afternoon, 80% of the state will see some rain. Action will remain through midnight, eventually ending early Tuesday morning, before sunrise. That is a full 24 hours sooner than our previous forecast, both for arrive and exit. Rain totals combined can be .25”-.75″ over the northern quarter of the state, .1”-.7” over central and southern locations. The map above shows cumulative precipitation through early Tuesday.

We are dry from Tuesday midday through sunrise Thursday. Up to this point in the forecast, various computer models are in relative agreement. They may differ on timing a bit, but generally have moisture totals that are similar, and hold true our thoughts as well. Next Thursday features a major divergence of opinion. One model, the European, develops a monster thunderstorm complex over Illinois, and rips it through Indiana and Ohio. Others, including the GFS, Canadian and Japanese models, have absolutely nothing in that time frame. Not even a little bit of moisture. Our forecast has favored dryness behind the early week system and we are keeping that bias this morning. However, it is important to follow the Euro, as it has handled the near-term pattern well, even down to the pop-up action of yesterday. Plus, we will be in need of some significant moisture by that time, even if we do pick up totals early in the week closer to the maximum end of the ranges. Given the current state of crops, moving into and through the reproductive phases, a rain of large magnitude and at that timing would be huge. But, it also looks to be a little too good to be true…a little too much to jump on right now.

For the extended period, we have dry weather from next Friday through Monday the 23rd. Then we have a front for the 24th with half to 1 inch potential, followed by a return to dry weather for the 25th through at least the 27th. If this forecast verifies, that means we have exactly 2 chances of significant moisture between now and the 27th, and we have not seen much significant moisture for the month thus far.

Temperatures will be above normal through the next 10 days, save for when rains are falling. So, next Monday can be normal to slightly below, but that is it in our current forecast. Our average above normal push will be around 2-5 degrees over regular daytime highs.