Two more dry days over Indiana with sunshine dominant. A second cool front will sag across the state today, giving a pleasantly cool morning and daytime highs also pleasant, just short of normal. We will start to see temps climb just a bit tomorrow, but we still won’t exceed normal.

Rains show up right away Friday morning. Rains look to be heavier now over the southern half of the state. From I-70 southward we can see half to 1.5” rains Friday, particularly from late morning through mid-afternoon. From I-70 northward, though, we are limited to a few hundredths to .4”. Northern Indiana may see a secondary wave of light rains to finish the afternoon and evening, but the coverage out of the second wave is only about 40%. Meanwhile, rains continue in southern Indiana through midnight. On Saturday, clouds can produce some high and miss leftover showers, mostly before noon in the west. Then we start to see some clearing there. In the east, we can see on and off showers through the evening, mostly in the far eastern row of counties in Indiana. Wrap around and lingering moisture from this system is mostly going to hang out over Ohio through the weekend, but we can’t rule out some incursions back to the west in eastern Indiana. The same story may hold for Sunday night in the east as well, although most of the state should see at least partly sunny skies for Sunday. Rain totals for the Friday-Saturday event can be up to 2 inches in southern Indiana, and up to half an inch from I-70 northward. Coverage will be 90% of the state. The map below shows rain totals through Saturday evening. 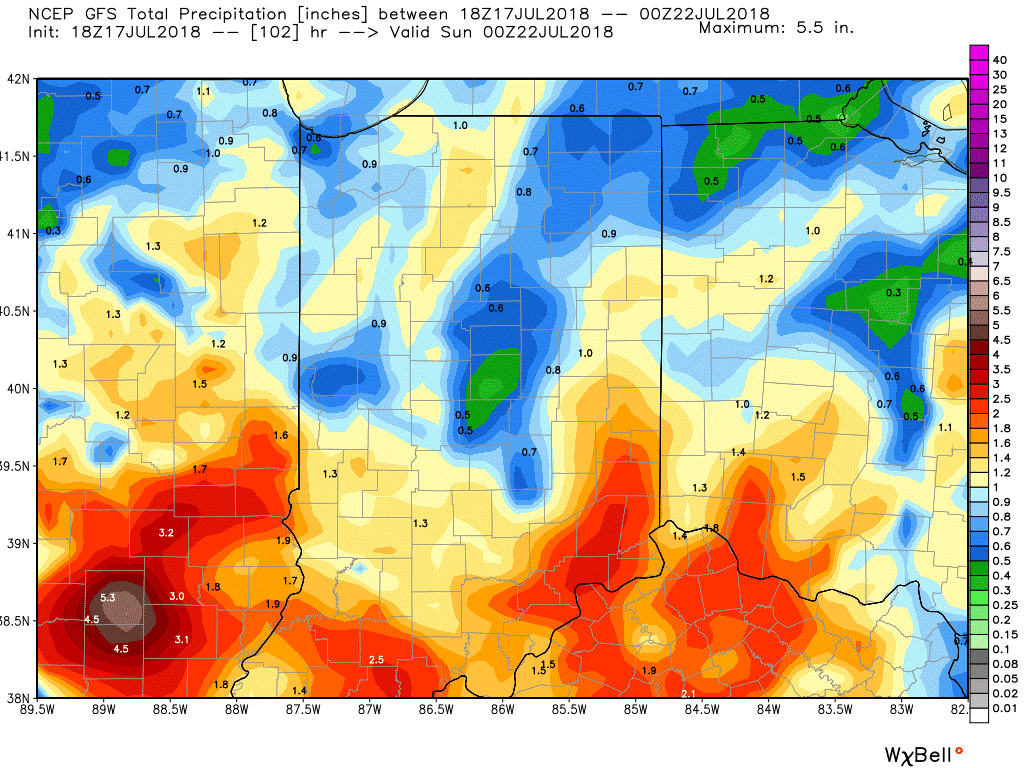 We are dry for the entire week next week, Monday through Friday. However, temperatures do not look to be a big story. We spend most of next week near normal. Temperatures this weekend will be below normal as the rains and that front move through.

The extended period has a system around the 28th into the 29th with rain potential of a half to 1”, and another system around the 31st into the 1st that can produce similar results. However, models seem to be hinting at some degradation of the systems, and they may end up with less moisture to work with. So, while we see some rain potential in the near-term forecast, there still is a lot of dry air next week, and no guarantees we finish the month with any help. The driest areas of the northern half of the state may have trouble getting more than just minor short-term relief this weekend.